OSHAWA, Ont. – A young black man told an Ontario court Wednesday he was beaten so badly by a Toronto police officer and his brother that he could barely feel anything anymore and didn't realize how seriously he'd been hurt until he saw blood pouring from his face onto the ground.

Dafonte Miller laid out his account of the Dec. 28, 2016 encounter in a packed Oshawa, Ont., courtroom, saying Michael and Christian Theriault chased him between two homes in Whitby, Ont., in the early hours of the morning.

It was then that he first saw the pipe, Miller told the court. The short-haired man was wielding the pipe, hitting Miller's face and head as the young man tried to shield himself with his arms, he said. The long-haired man, he said, didn't use the pipe but "pretty much helped his brother."

At one point, Miller was on the ground, but then got up and moved towards the door of a nearby house, feeling his way along the side of the building, he said.

"I didn't really get a chance to fight back, I was more trying to defend my face," Miller told the court. "I seen the pipe, you know? I was trying to use the rest of my strength to get out."

Miller said he felt more hits from the pipe as he knocked on the door to ask for help and when he turned around, he was struck twice on the left side of his face. "I said, 'You're going to kill me,' and my eye got hit," he said.

"I just wasn't feeling that much anymore. I didn't know where the blood was coming from at first," he said. "It was the blood that made me realize I was bleeding profusely."

Michael Theriault, who was off duty at the time, and Christian Theriault are jointly charged with aggravated assault, and separately charged with obstruction of justice over how they portrayed it to investigators. They have pleaded not guilty.

Court has heard the brothers told investigators Miller was the one who attacked them with a pipe after they caught him breaking into their parents' truck. The pair told police they feared for their lives. 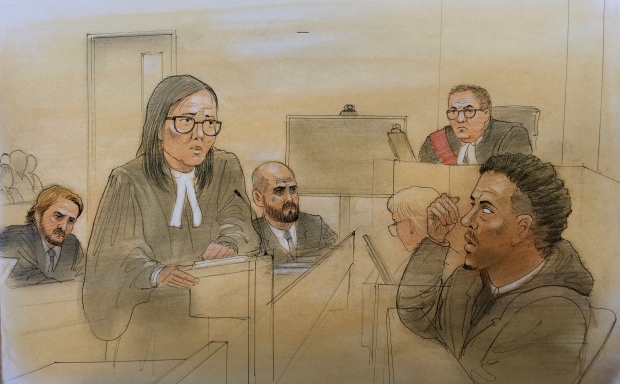 Miller, however, said he and two friends were wandering the streets waiting to go meet up with some girls when they were intercepted by the brothers.

The long-haired man asked if they were from the neighbourhood, and Miller's friend Antonio Jack said no, pointing to the area where they lived, he testified. The short-haired one then asked what they were doing there, Miller said.

The conversation had so far been casual and "I didn't think anything was weird until we got asked what we were doing here," he told the court.

Miller said he asked why they were being questioned and the short-haired man replied that "he's a cop, he can ask what he wants."

The group laughed and started walking away but when Miller looked back, he realized they were being chased, Miller said. The group dispersed and Miller tried to run to the front door of a home, but the brothers were catching up so he veered between the house and the neighbouring one, he said.

That's where the violence began, Miller said, noting he only ever saw the short-haired man with the pipe. Prosecutors asked Miller if he had even held the pipe himself or had brought it with him, and he said no.

When Miller realized no one was coming to the door, he tried to go to another house but instead only made it to the driveway, he said. He collapsed onto the ground and, sitting up against a car, tried to call 911, he said.

The short-haired man took Miller's phone from him and spoke to the dispatcher, he said.

Some in the courtroom cried as the 911 call was played aloud Wednesday. Miller can be heard in the background shouting "You've got the wrong guy" as Michael Theriault speaks to the dispatcher.

Soon, officers arrived at the scene, closely followed by an ambulance, Miller said. "I didn't even think that I was going to make it to the hospital," he said.

Miller told the court his left eye "pretty much burst" during the incident and he has since undergone two surgeries help repair the area. He said he now wears a prosthetic eye on that side.

In the weeks after he was discharged from the hospital, Miller said he had to sleep in the same bed as his mother so she could keep his head in the right position and prevent his eye from "bleeding out."

The young man said his right eye was also badly hurt in the incident, the "structural bones" of his face were broken, his wrist was fractured, and he had bruises in many places.

For months, Miller stayed home, rarely venturing out and never by himself, he said.

"I was just shaken up a lot," he said, adding he knew he looked different and didn't want to be around people.

Though most of the pain has faded by now, Miller said he has less sensation in his right hand and needs to use special eye drops.

This report by The Canadian Press was originally published on Nov. 6, 2019.