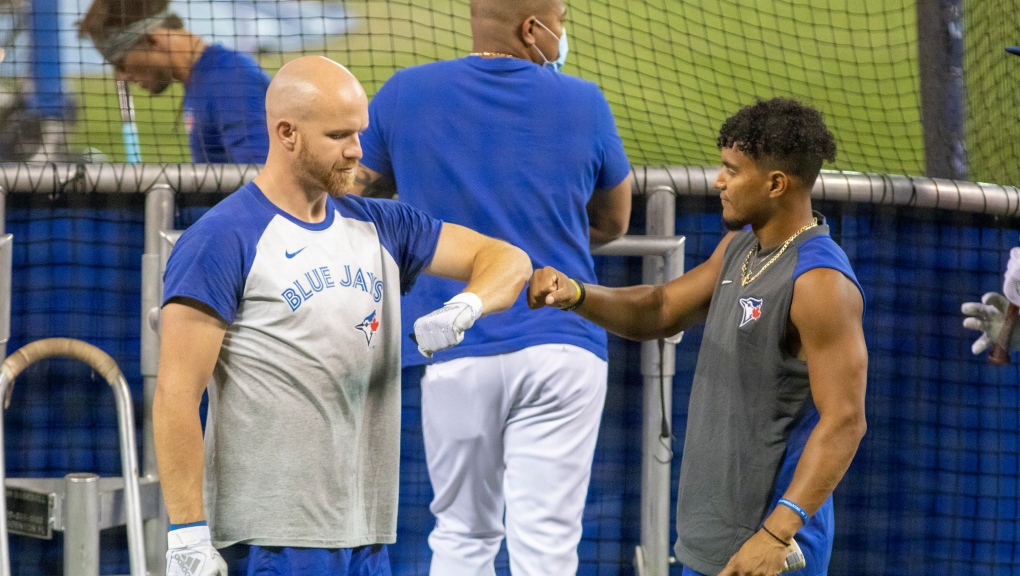 TORONTO -- A packed summer training camp schedule has the Toronto Blue Jays squeezing in workouts, practice sessions and intrasquad games ahead of a fast-approaching regular season.

Infielder Travis Shaw got things rolling with a string of tweets about the team's closed environment at Rogers Centre and adjoining hotel. Manager Charlie Montoyo then dropped news that Vladimir Guerrero Jr., would be moving to first base. And finally there was word that players who spent the week in Florida had arrived in town.

There is no shortage of storylines in this one-of-a-kind summer that's only just beginning. Where things go from here is anyone's guess.

A main issue remains where the Blue Jays will play home games this season. The federal government granted the team approval to modify the 14-day quarantine rule during the COVID-19 pandemic, allowing training camp to begin this week at the domed stadium.

"I'm glad that we're here," Montoyo said on a conference call. "I really am and we're going to follow all the guidelines. I promise you that."

Earlier in the day, Shaw voiced his concern about the length of time players may need to stay in their current environment. He replied to a tweet from TSN reporter Scott Mitchell, who reported that multiple sources told him players could face a $750,000 fine and potential jail time if seen outside the ballpark -- which also are maximum punishments in the Quarantine Act.

"We were told two weeks... not all summer... all summer is a bit much," Shaw tweeted.

We were told two weeks... not all summer... all summer is a bit much https://t.co/6S7euLbHWA

"This is absolutely ridiculous," Stroman tweeted, adding in a subsequent post: "Guys are going to be walking around in full disguises. Lol."

In an email reply, the club confirmed that before arriving in Toronto, players understood the maximum penalties for leaving the Rogers Centre footprint during camp.

The team has expressed its desire to play home games at the dome during the 60-game regular season. A decision is expected in the coming days.

Players are expected to be advised of specifics on the setup for the upcoming campaign once a finalized plan is in place.

Toronto will travel to Boston for pre-season games July 21 and 22 before the season opener July 24 at Tampa Bay. The Blue Jays' first home game is set for July 29 against Washington.

If Rogers Centre is ruled out for the season, the Blue Jays would likely play at TD Ballpark at their spring-training facility in Dunedin, Fla., but that backup plan has not been finalized.

Florida has been dealing with a spike in COVID-19 cases of late. The state reported 11,385 new cases on Friday while Ontario reported just 116 new cases.

Shaw, who signed with the Blue Jays last December, posted two additional tweets after his original reply but they were later deleted.

"1) Let me be clear. We are on board with the TWO week quarantine. I currently have a PAID for condo a block away from the stadium that I can't use. At no point would I risk public safety or not follow rules. Is it wrong to want to live in a place that I've already paid for..."

He added: "2) to be able to go on a walk (WITH A MASK) to be able to get fresh air, walk to go get takeout food (not eat inside). We aren't looking to party, hit the patios, go out at night, anything like that. Public safety is priority number 1...."

As Major League Baseball's lone Canadian team, the Blue Jays face an additional hurdle because of the border and quarantine rules during the pandemic. Players and team staff have been isolating from the general public in the so-called 'bubble' of the stadium and hotel at the north end of the building.

"I wanna make it clear, we're not asking for special treatment," Blue Jays outfielder Randal Grichuk tweeted Friday. "We understand that we need to stay in a "quarantine bubble". We wanna make sure everyone is safe.

"The toughest part is them not allowing our family to come with us. That's what makes it tough for a lot of guys."

The Blue Jays have not commented on reports that a single player recently tested positive for COVID-19 in Florida. The positive result forced 12 players to remain in Dunedin, according to USA Today.

Most players -- about 46 in total, Montoyo said earlier in the week -- flew to Toronto on a charter last Sunday.

Without providing specifics, Montoyo said other players arrived in town Thursday and planned to work out before the team's intrasquad game Friday evening.

During his 15-minute video call with reporters, Montoyo confirmed that Guerrero would cross the diamond and focus on first base.

"It's all about a player having the best chance to compete," Montoyo said. "It's going to be a short season. So for me, the best (plan) for Vlad is to play first, DH and also play third."

Guerrero, who hit 15 homers and drove in 69 runs in his rookie season, said he was on board.

"Wherever the team needs me, I'm going to be ready," he said via translator Hector Lebron. "So I'm OK with that."