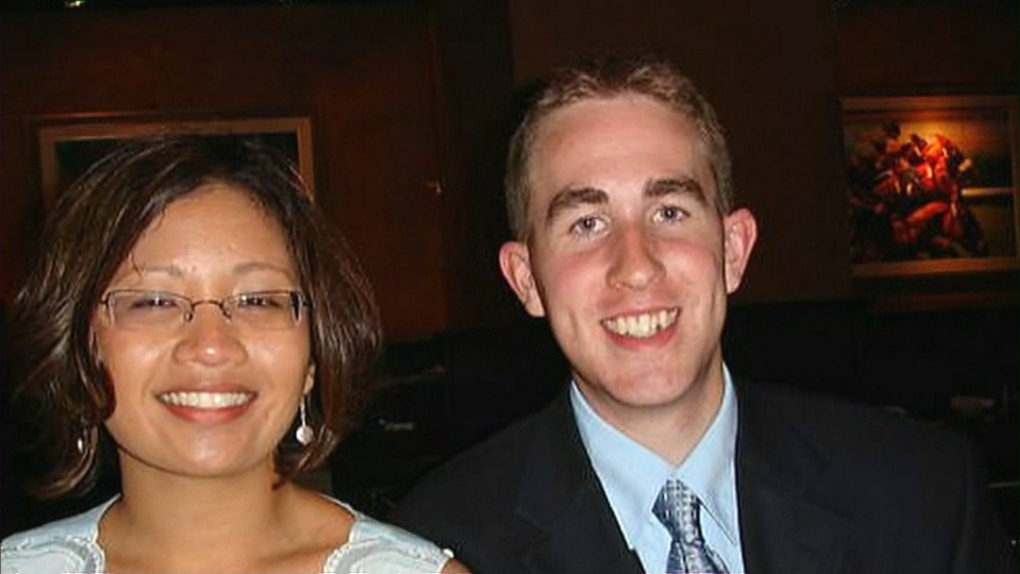 Philip Grandine and his wife Anna are seen in this file photo.

TORONTO -- An Ontario court has ruled that a former pastor convicted in the death of his pregnant wife deliberately and secretly sedated her so she wouldn't stand in the way of his extramarital affair and love of pornography.

Philip Grandine was found guilty of manslaughter in February in the death of his wife Anna Grandine, who drowned in the couple's bathtub roughly eight years ago.

The jurors who decided his fate were told they could convict Grandine if they found he surreptitiously drugged his wife with the anti-anxiety drug lorazepam or provided it to her; or if he knew she had taken it and did nothing to stop her from getting in the bath while under its influence.

In a decision released Thursday, Superior Court Justice Faye McWatt determined it was Grandine who researched, obtained and administered the medication, better known under the brand name Ativan.

Grandine, the judge wrote, had a "hostile animus," or ill will, toward his wife and motive to want her incapacitated.

"The defendant was enamoured with both (his mistress) and with pornography. On the occasions in which his wife was incapacitated, the way for him to pursue both these fascinations was cleared and unimpeded," McWatt wrote.

She also found he lied to police about his whereabouts on the night his wife died, and his efforts to get his wife out of the tub, in order to divert attention from his role in her death.

Anna Grandine was 29 years old and 20 weeks pregnant when she died. Tests later revealed she had lorazepam in her blood despite not having been prescribed it.

Defence lawyers argued at trial that she took the medication herself because she was depressed about her husband's affair, and either slipped and drowned in the tub or took her own life.

But McWatt rejected that narrative, saying there was no evidence Anna Grandine was depressed or that she had access to the drug, adding the young woman would not have been so confused about her symptoms if she had willingly taken the medication.

Philip Grandine, however, had access to lorazepam through his job as a nurse manager in a nursing home, and while there was no evidence at trial that any drugs went missing from the facility, the judge found he took it from his workplace.

McWatt also ruled it was Philip Grandine who conducted a number of online searches related to the drug on the couple's home computer.

Court heard at trial that Philip Grandine had begun working at the nursing home after news of his affair forced him to step down as pastor. Among other duties, he was responsible for distributing medication and disposing of it, court heard.

Another pastor agreed to provide marriage counselling services as long as Philip Grandine ended the affair and gave up viewing pornography, court heard. He accepted the conditions and his wife installed a porn-blocking program on their computer.

A few days before her death, Anna Grandine suddenly felt ill, experiencing a number of symptoms she could not explain, court heard.

Her husband took her to the hospital and she underwent several tests, but was released because her symptoms had faded, court heard. Her blood samples were only tested for Ativan after her death, at which point the drug was discovered.

McWatt found that Philip Grandine had administered lorazepam to his wife and himself that day to test the drug's effects. He gave her the drug again several days later, McWatt ruled.

It was Philip Grandine who called 911 to say he had been out jogging and returned to find his wife unresponsive in the tub, court heard. He told police he had tried and failed to get her out.

McWatt found Philip Grandine lied about going jogging and was in fact at home during that time, talking to his mistress on the phone and obtaining a temporary password so he could uninstall the pornography-blocking software.

She also called his efforts to pull his wife from the water "a pretense and a charade," noting he was trained to act in medical emergencies and to lift and carry the ill.

"Had he truly intended to get his wife out of the bath, he would have been able to do so or, at least, would have made more of an effort to do so," she wrote.

She found the Ativan contributed to Anna Grandine's drowning. The amount given to her may not have been toxic, but the young woman would have been sedated, if not unconscious, the judge wrote.

"Mrs. Grandine was sufficiently affected by the lorazepam the defendant surreptitiously administered to her that she was less able to protect herself from physical harm and drowning than she would otherwise have been."

Prosecutors argued Thursday that Philip Grandine should spend 13 to 15 years behind bars, arguing he breached the trust of both his wife and his employer.

Crown attorney Donna Kellway also noted the "special vulnerability of his wife being pregnant" as an aggravating factor.

Defence lawyer Amit Thakore argued the range proposed by the Crown is excessive given that there was no violence involved. He suggested a range of five to seven years, with some credit for the weeks Philip Grandine spent in custody and the years he spent on bail under strict conditions.

The maximum penalty for manslaughter is life in prison. There is no minimum sentence unless a firearm was involved, in which case it's four years behind bars.

This is the second time the case has been before the courts, after the outcome of the first trial was overturned on appeal.

In the previous trial, Philip Grandine was charged with first-degree murder but found guilty of manslaughter and sentenced to 15 years in prison.

Ontario's highest court found the judge in that case made an error in answering a question from the jury, and ordered a second trial on the manslaughter charge.

As a result, prosecutors in this trial were barred from alleging Philip Grandine intended to kill his wife.

The case is due back in court on Jan. 7.

This report by The Canadian Press was originally published on Nov. 21, 2019.