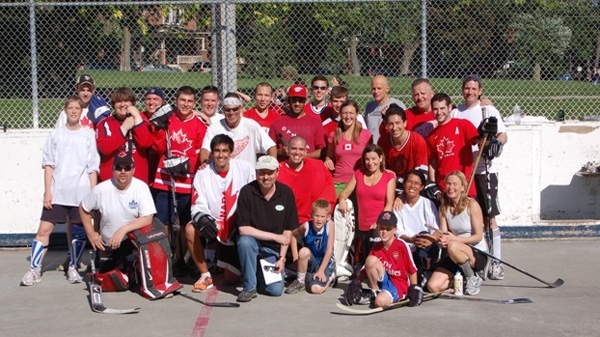 Richard Loat is making his way across the country holding up a cardboard sign. But he's not asking for a ride and he hasn't run out of money.

Instead, the 22-year-old university student from Vancouver is asking Canadians to play hockey in exchange for a food donation through Five Hole for Food (FHFF), a not-for-profit initiative he founded in 2010.

Named after the term given when a hockey player scores through a goalie's legs, FHFF is making its second annual road trip across the country to help food banks in 13 Canadian cities.

The initiative collects food donations during street hockey games organized through social media, which Loat describes as the backbone of the start-up charity. Without sites like Twitter, he said it would be nearly impossible to reach out to so many Canadians to join the cause.

This year's road trip kicked off in St. John's, NL, on June 23 and is set make a stop in Toronto on July 1, before returning to Vancouver on July 9.

"This year, adding four cities and having grown quite a lot over the year ... we thought it was an ambitious goal to raise 10 times what we wanted to raise last year and we feel confident that we can do that," he said.

It's a number that Toronto resident Steve Dangle is challenging his community to beat when FHFF arrives in the GTA to play a "red vs. white" game in celebration of Canada Day today.

"I want Toronto to beat that. It blows my mind, how the hell did they raise 4,100 pounds of food? So, Toronto, (you're the) biggest city in Canada: we've got to beat it," he said.

Loat said he got the inspiration to create the cross-country charity during Vancouver's Winter Olympic Games in 2010.

An avid hockey fan, he set up a few road games on a busy downtown-Vancouver street and realized their potential when the games started to get big crowds.

"It was such an inspiring and empowering force that it was clear we could take road hockey across Canada and do something good with it," said Loat.

He said the primary goal for the FHFF crew is to raise awareness for the food banks in the summer months, when donations from Christmas and Thanksgiving start to run low.

Another priority is to always have a wrap up celebration at a local restaurant after each game.

"By bringing people together you're creating a memory. It makes the giving experience more personal; you're more attached to it. You know that food is going to a hungry stomach in the next week or two weeks," said Loat.

Last year, Torontonians raised about 289 pounds (131 kg) of food donations, and there were enough participants to create two full teams with rotating players. This time around, he said he hopes that at least 50 people can join him on Friday with a food donation that will benefit Toronto's Daily Bread Food Bank.

The 23-year-old hockey fan said he first heard about the game online in 2010 and jumped at the chance to participate because it sounded like a lot of fun, but also because it was part of a good cause.

Dangle said even those who wouldn't consider themselves athletes can come out and participate in the game.

"I'm a big fan of street hockey and playing it outside but I'm definitely prefer talking about it (rather) than playing it. I'm not an athlete," he said.

Loat said he remembers the Toronto game from last year as one of the best ones on the tour because the team was able to play at a real outdoor rink at Withrow Park, complete with a score-clock.

"It was just a great game, we had guys and girls come out. We always struggle to get girls out, I think it's important to get girls out playing hockey as well," Loat said.

He said that no matter who wins Toronto's game, the food bank ends up being the winner.

"I think the fact that Canadians are so cognoscente of that speaks volumes of who we are as a country. Once we've come and gone people will remember us and indirectly also remember the food banks and I think that's a really powerful thing that we're able to do," he said.

Five Hole for Food will play in Toronto on Friday, July 1 at Withrow Park at 725 Logan Ave., near Danforth Avenue and Pape Avenue.

The game will be played from 12 p.m. to 6 p.m. with special guests including Duke the Dog from the Toronto Marlies and Carleton the Bear from the Leafs. Giveaways will include an autographed Maple Leafs hockey stick and a post-game celebration is planned at the Boston Pizza at 40 Eglinton Ave. East, near Yonge Street and Eglinton Avenue.