The intersection of River and Dundas streets is currently closed after a stationary crane fell in a construction site just after 10:30 a.m., police said.

Toronto Fire Platoon Chief Dan Sell told CP24 that nobody was injured inside the construction site but he added that there could have been two potential injuries to pedestrians outside.

“A girl that was here, a female, she narrowly avoided being killed,” Sell said. “She was close to her bike, the crane fell onto the street, it damaged her bike but thankfully she was okay.”

Sell said another male bystander was in the area at the time of the collapse but sustained no injuries.

“We had a male that was further north on River Street. They found that he is suffering [from] shock obviously because it almost hit him.”

Paramedics said they have assessed both people at the scene and no serious injuries have been reported.

The Ministry of Labour has been notified of the incident. 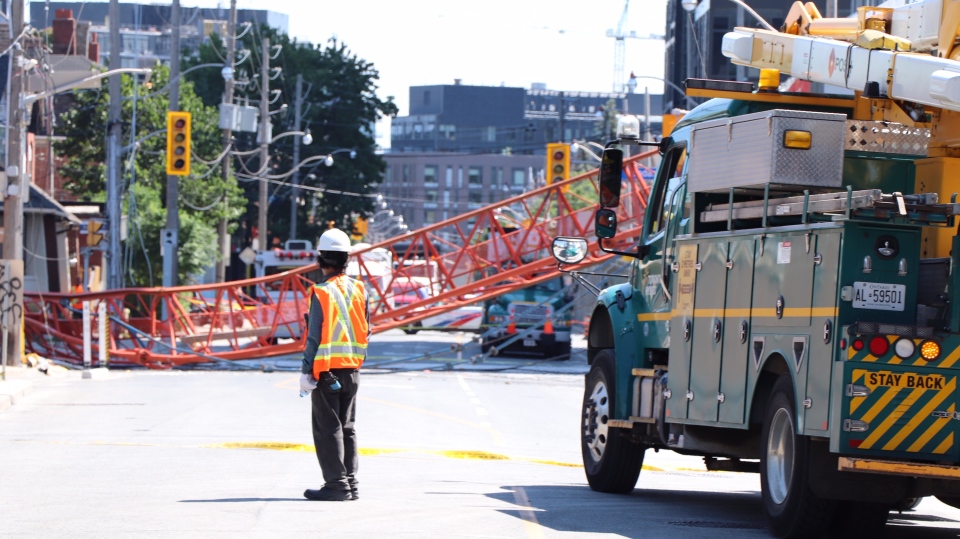 The cause of the collapse is under investigation but based on preliminary reports, Sell said construction crews noticed that some bolts that were holding a turntable down to the structure had broken off before it went into operation this morning.

“They tried to evacuate the area right away,” he said. “They got all their construction crews out but unfortunately they didn't have the area secured yet. But we got really lucky, like I said, could have been much worse.”

Developer Daniel’s Corporation confirmed in a statement that the crane fell at their construction site and said a mechanical failure led to a partial collapse of the crane.

So this just happened less than 100 yards from my place. Miracle there were no cars or pedestrians there (it is a streetcar stop and it’s a busy intersection). Huge construction crane in Regent Park. River/Dundas. Toronto pic.twitter.com/lZfEfGbloG

“The crane was not in operation at the time, there was no operator on board and no serious injuries have been reported,” Daniels said in a statement.

“Construction at the site has been temporarily suspended and we are fully cooperating with investigators. We have also initiated our own internal investigation into the incident.”

Police have determined that no criminal activity occurred at the site to cause the collapse, Sell said.

"Toronto police have cleared it, there's no criminality involved here which is good because we just look at this that it's accidental," he said. "And the Ministry of Labour has collected all the pictures and done all the interviews they needed."

Mayor John Tory released a statement and said he is thankful no one was seriously injured or killed in the incident.

“My office has reached out to the Minister of Labour's office and asked them to make sure clear direction is sent to the construction industry as soon as possible and that they consider additional inspections,” Tory said in a statement.

“Toronto Building has sent an inspector to the site to assess if there has been any impact to the surrounding building structures." 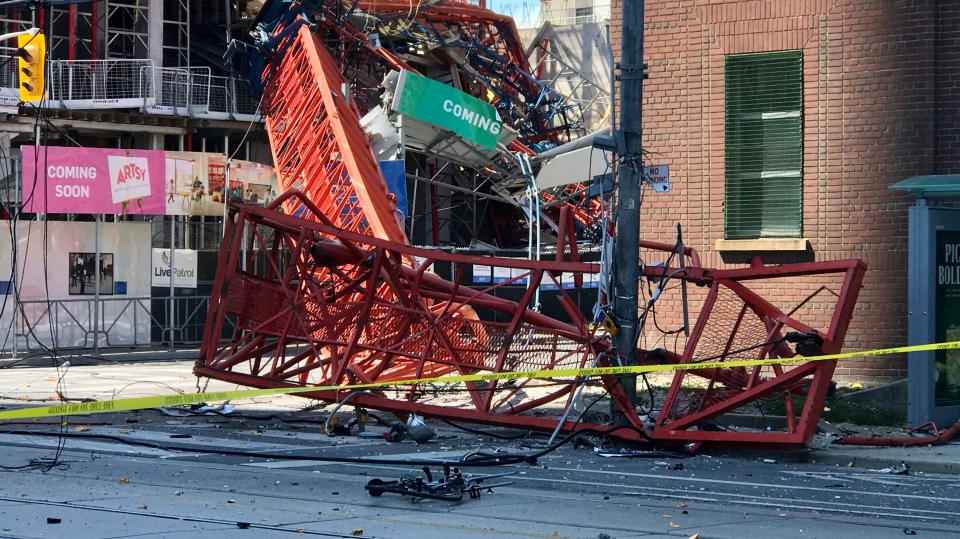 Premier Doug Ford also commented on the collapse this afternoon during a press conference.

“I can't remember the last time a crane collapsed like that so obviously there’s an issue," Ford said. "I don’t know if it’s the same company or when they erected the crane itself. But I have confidence in the Ministry of Labour that they’ll get down to the bottom of it.”

Hydro outages had been reported in the area.

Toronto Hydro said a transformer blew out in the area impacting about 1,500 customers.

As of 6 p.m., power had been restored to all customers on Sackville, Shuter and Parliament streets and on Bayview Avenue. Toronto Hydro said one building at Dundas and River streets remains without power due to extensive damage and clean-up is needed to fix the outage.

Police are asking drivers and pedestrians to avoid the area.

"Toronto police have many units on scene," Const. Michelle Flannery told CP24. "There are numerous road closures in the area."

As for removing the crane, Sell said if the plan put forth by engineers is approved several cranes will be used to cut and remove parts of the fallen structure out of the area. He estimated that the removal should be complete by Friday night.

This is the second crane collapse in the city in under a month. On July 16, a crane fell onto the top of an office building at Simcoe and Wellington streets. No serious injuries were reported in that incident either.