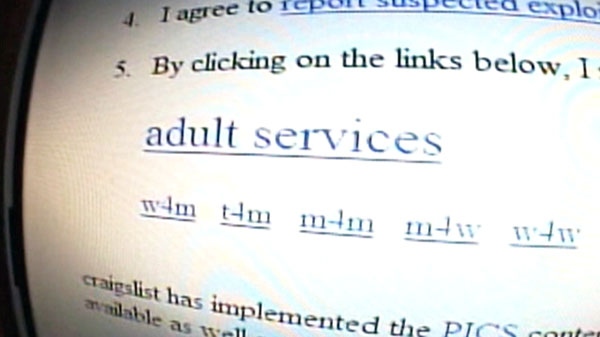 On Saturday afternoon, most Canadian homepages did not display the section. Previously, the ads had shown blatant sex listings, which included prices and accompanying photos.

Justice Minister Rob Nicholson said he was glad that the San Francisco-based company had taken the section out of its popular listings.

"Our government was concerned that such advertisements could facilitate serious criminal offences, such as living on the avails of child prostitution and trafficking in persons," he said in a statement sent to The Canadian Press.

For the past four months, provincial and federal politicians have lobbied Craigslist to remove the ads following a similar debate in the U.S., where several attorneys general complained that the section promoted the illegal sex trade.

That public debate prompted Ontario Attorney General Chris Bentley to write a pair of letters to Craigslist chief Jim Buckmaster, personally asking him to get rid of the ads in Canada. Governments in Manitoba, Saskatchewan and Alberta followed with the same request.

"It's an important step and an important signal," Bentley told CP. "We're pleased Craigslist appears to have taken steps to protect women, children and the vulnerable."

No official comment was immediately available from Craigslist, and some ads in Halifax and elsewhere were online Saturday afternoon.

Some advocates for a safer sex trade have said pulling the ads simply sweeps the larger issues of prostitution and sexual exploitation out of the public eye.