Crackdown on late-night partying at Toronto beaches necessary to move to Stage 3: mayor

TORONTO -- Mayor John Tory says putting a stop to late-night partying at city beaches is necessary to ensure that Toronto can advance to Stage 3 of the province's reopening plan.

On Thursday, the city announced it would be closing parking lots at select beaches across Toronto, including Cherry Beach, at 7 p.m. on weekends starting Friday due to concerns over late-night gatherings where people were drinking and neglecting to follow physical distancing rules.

The city also says police officers will be ramping up enforcement at beaches to crackdown on people who don't follow the rules.

Speaking to CP24 on Friday morning, Mayor John Tory said gatherings at some city beaches in recent weeks have been "out of control" and it is time for the city to take steps to curb the bad behaviour.

"Theoretically drinking is not allowed in any of these parks or beaches and I've always said that I'm not hung up about that but at the same time people can start to carry these things to excess when they are carrying huge cases of beer and magnums on to the beach to drink," Tory said.

"This was beginning to pose a real risk of being the thing that caused us to slide backwards in terms of COVID-19."

The parking restrictions will be in place at Marie Curtis Park, Humber Bay West Park, and Cherry Beach, three beaches that have seen the most crowding.

The city noted that at some of these beaches, people have been setting up DJ equipment, lighting bonfires, drinking excessively, and leaving piles of litter behind.

"I'm not trying to be a killjoy. I'm just trying to make sure that we don't, at any cost as we move towards Stage 3, end up going backwards and closing things down because of health issues," Tory said.

"This all sounds like it is overly protective but at the end of the day, we don't know enough about this virus and we sure know one thing, we don't want to go back to where everything was shut down. The restaurants and bars can't afford it and people can't afford it."

A Toronto resident who lives near Cherry Beach said she showed up to the water on Monday morning for a swim and found remnants of the party from the night before.

"There was garbage everywhere," she told CP24 on Friday. "There was still a fire going on the beach. And there was still some kids hanging out, listening to music, walking around. I've never seen anything like it and I've been swimming here for probably 20 years." 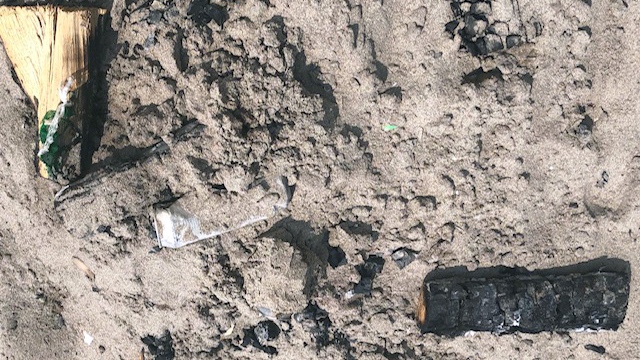 “Actually, I’m all for it. This is not the first time that we’ve been here this season, and every time we’ve come here, we’ve seen lots of garbage,” Toronto resident Tania Carolo said.

Gabriel Dimarco, who was playing with his toddler on the beach on Friday, said he can understand that people want to visit but wishes it was done respectfully.

“I understand people that people have been inside for quite a while now. They want to enjoy, they want to have fun,” Dimarco said. “Respect all the kinds of age, families come in the morning.

Sixteen-year-old Jade Aniceto was as at Cherry Beach Friday to swim and train for a triathlon. She said she prefers to exercise at the beach rather than party.

“You never know. Some of them might have COVID, but still want to party instead of staying home,” she said.

'People will be ticketed'

City of Toronto spokesperson Brad Ross called the litter being left behind at some beaches "excessive."

"People come out to the beach, for example, for an early morning walk, there are empties and all sorts of litter laying around," he said. "We do need to ask people to please be mindful of others."

"People will be ticketed, they will be towed, and people will also be getting tickets for not physically distancing, for drinking," Ross said.

"We are not opposed to people having a cold beer in the park on a hot day. We get that. That's not what this is about. This is cases and cases of beer being brought in, DJs setting up equipment, this is semi-organized partying well into the early hours on these beaches."