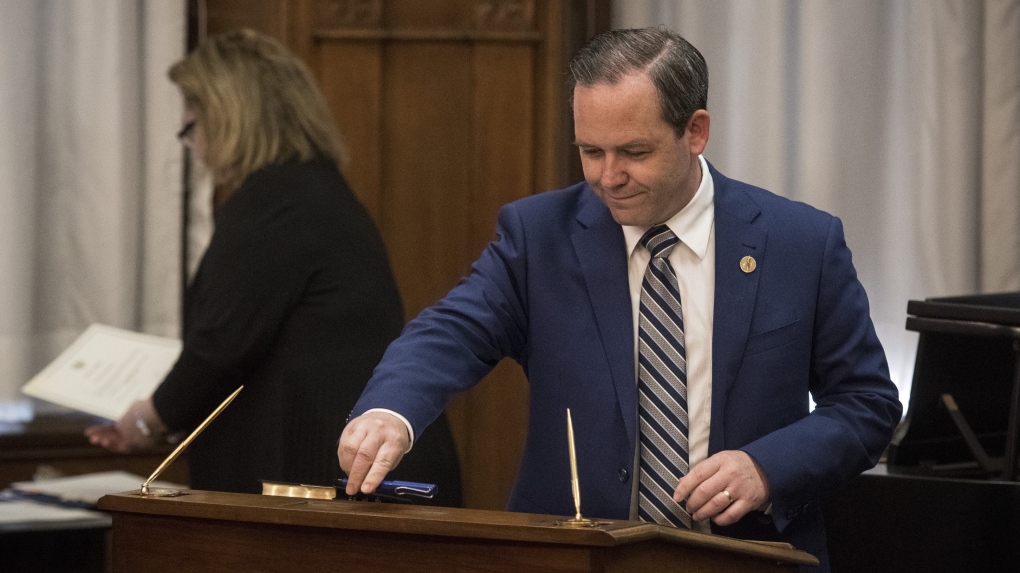 Doug Downey is sworn into his new role as Ontario's Attorney General at Queen's Park in Toronto on Thursday, June 20, 2019. THE CANADIAN PRESS/ Tijana Martin

Doug Downey addressed the Empire Club of Canada on Thursday in a live video stream from his downtown Toronto office. In the hour-long appearance the attorney general explained how public health restrictions forced Ontario's justice system to employ digital and online resources.

"The pandemic showed us in stark terms how far behind Ontario's justice system had fallen," said Downey. "New thinking and quick action put us on a path that can actually achieve what Ontarians have been crying out for for decades."

Downey went on to say that Ontario's justice sector had been paralyzed by the magnitude of having to modernize, but the pandemic made change a necessity.

"The justice system can't close in the face of these unimaginable odds," said Downey. "We have to lean into it, we have to find ways to not only make it work but make it work better."

Remote attendance at court, digital signatures where only hard copies had previously been mandatory, electronic issuance and sharing of court documents, as well as service by email without consent or court order are some of the innovations Downey said had been instituted during the pandemic.

All of the above, he said, had been made permanent rules of court in the past week.

"These changes actually made our system stronger by making it more accessible to Ontarians and more resilient to whichever challenges the future might bring," said Downey, who noted that until Tuesday the civil rules referenced telegrams but now instead refer to emails.

Downey also said that broadcasting court proceedings on video streaming websites had increased participation in the justice system. As an example, he said approximately 20,000 people watched the trial of a Toronto police officer convicted of assault in the brutal beating of a young Black teen in Oshawa, Ont.

"We'll never see a courtroom that big in Ontario unless we start using stadiums built for hockey or baseball or basketball," said Downey.

He added that the Superior Court reported that 50,000 hearings had been conducted virtually in a province where the technology was brand new.

Downey said his ministry plans to lean in to that evolution after the pandemic comes to an end.

To that end, he said the Halton Region consolidated courthouse construction project had been cancelled in May because it "had been developed years ago as an answer to an outdated question" and that it would be irresponsible to move ahead with what his ministry now knows about how the justice system will work going forward.

Instead, Downey said the Ministry of the Attorney General will preserve the courthouses in Milton, Ont., and Burlington, Ont., that the Halton Region courthouse was meant to replace. He said they will be renovated and updated to be "modern justice hubs."

Downey said he was aware that any moves to update the justice system had to create space for people who may not have ready access to Internet service, a computer, or a phone with a large data plan. He said that investments in infrastructure will have to be made in northern and Indigenous communities to insure that they have equal access to justice facilities.

This report by The Canadian Press was first published Dec. 3, 2020.