TORONTO -- A couple who just returned to Canada after 14 days in isolation aboard a cruise ship in Japan amid the novel coronavirus outbreak say the experience was a nightmare—and that every time they heard a knock at the door, they were scared of being taken away.

Diane and Allan Chow were two of 129 passengers who were transported to Cornwall, Ont. NAV Centre for another 14 days in quarantine after returning from what they describe as a prison sentence aboard the Diamond Princess cruise ship.

“It was very stressful. The stress came on because the captain of the ship would be announcing on a daily basis how many people are infected and moved to the hospital. The number jumped so quickly,” Diane Chow told CTV News Toronto on Friday. “That number really, really scared us.”

The Scarborough couple was a day away from disembarking the ship when they were told there would be a one-day delay because a traveller had contracted the virus, now known as COVID-19. The following day, as everyone was preparing to leave, they were told they would have to remain on the ship for another 14 days.

“We basically stuck in our room,” Allan Chow said.

Health officials would come to their room to test them for the virus, but the Chows said they never heard their results. They later learned that officials were only notifying those who had presumed positive results before removing them from the ship and taking them to the hospital.

“We were kept in suspense,” Diane Chow said. “When we hear a knock at the door, we got scared. Are they coming for us?”

According to Global Affairs Canada, 256 Canadians were aboard the Diamond Princess ship docked in Yokohama, Japan when the outbreak first started. Forty-eight Canadians tested positive for COVID-19 and were transported to local hospitals.

More than 600 confirmed cases of the virus were found on the ship. 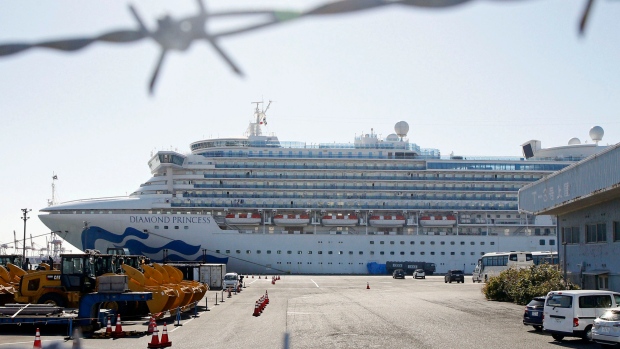 The Chow family believes the cruise could have done a better job at containing the virus and that while they could have left their room to walk around, they didn’t feel it was safe.

“If they had done a proper job or seek professional help like they should have, the virus shouldn’t have spread that fast. That’s what I think we are mad about. Because we are passengers, we are innocent people who got caught in these circumstances,” Diane Chow said.

“It was like a prison that we lived in fear each day. I call it a nightmare.”

Canadian passengers aboard the Diamond Princess ship were flown back to Trenton, Ont. from Tokyo Haneda International Airport early in the morning on Friday. Once landing at the Canadian Forces Base, they were checked by medical staff and provided with food before boarding a coach bus for a nearly three-hour drive to the NAV Centre in Cornwall, where they will remain for 14 more days.

"None of the passengers exhibited symptoms of the novel coronavirus (COVID-19) upon arrival (To Trenton)," Global Affairs said in a statement.

Diane Chow said she was relieved to be back in Canada and that officials gave them a “warm welcome.”

“They really care. They took us and they guided us and answered all the questions that we needed,” she said.

“It’s a big relief,” her husband said. “The people in Trenton and the people in Cornwall, they are just absolutely beautiful.”

The couple started a Twitter account at the beginning of their lengthy ordeal in order to provide updates to family and friends, as well as share stories of what life was like aboard the quarantined cruise ship. In some of their final posts, the couple thanked everyone who supported them , including Princess Cruise staff, the Canadian Red Cross, and all of the volunteers in Trenton and Cornwall.

“As we take all of this in, we didn't want to forget to thank everyone that has supported us through this journey. It's been quite an ordeal.”

Diane and Allan Chow say that they don’t mind spending another 14 days in isolation, calling it the final hurdle before they can return to their family knowing they won’t be spreading the virus to anyone they love.