TORONTO -- The Kaisers were supposed to move into their new home next month, but last week their builder informed them that it was suspending operations due to the COVID-19 pandemic.

This means the Milton couple may soon have nowhere to live.

"I know this is not the greatest situation, a husband with his pregnant wife might end up in a pandemic event, outside, with no house, potentially," Aseel Kaiser told CTV News Toronto.

The Kaisers were supposed to assume occupancy of their new build by Apr. 16, 2020, which was their "firm closing date." They sold their current home, where they had lived since 2013, and hoped to be in their new home before their baby was born.

"I'm kind of an 'A'-type personality, so it's a little stressful for me, also thinking about the future of our potential family," wife Dawn Kaiser said.

In an email last week, Mattamy Homes advised the couple that "in light of the recent announcements and recommendations from governments across Canada" it would be suspending operations until March 31, 2020. This would constitute an "unavoidable delay" as set out in their agreement of purchase and sale.

On Monday, the Ontario government announced the closure of all non-essential businesses to help curb the spread of COVID-19. However, most construction sites are not affected by the provincial mandate.

"I'm a little worried. It's hard when you have everything planned and all your plans go out the window," Dawn said.

In a statement to CTV News Toronto, Mattamy Homes said that "many purchasers in numerous Mattamy communities across the country are affected by this situation."

Mattamy added that it made the decision to safeguard its customers' and employees' safety, but recognized "the decision affects the closing dates of many of our customers' homes." 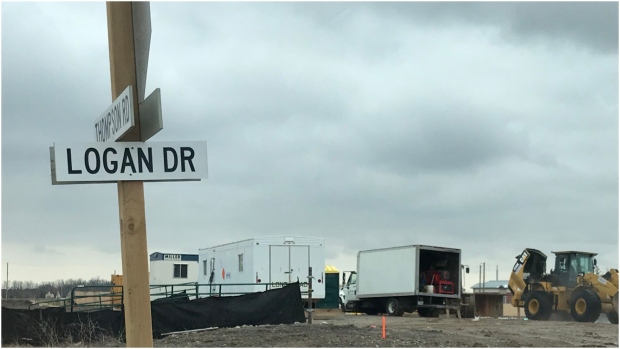 The Kaisers said they're not casting blame, but are admittedly concerned about the future.

"We completely support the intention behind it all. It's extremely important to stop the spread of the virus and keep everyone safe," Dawn said. "We're just kind of scrambling, trying to pick up the pieces to figure out where we're going to live...where we are going to put our stuff."

Mattamy told CTV News Toronto that it is "diligently preparing new policies and procedures designed specifically in response to COVID-19" in an effort to return to work and resume operations as soon as possible.

However, in the email the Kaiser's received from the company, Mattamy said the date operations will resume "will remain fluid", so it cannot provide a new closing date at this time.