A local city councillor says he wants people who get trapped while trying to climb the Scarborough Bluffs to foot the emergency bill to cover the cost of the rescue.

People have climbed the bluffs for years despite its unstable edge, and a potential $5,000 fine for trespassing. It’s forced the city to conduct dozens of rescue missions to save people stuck on the cliffs.

Paul Ainslie, who represents Ward 24 Scarborough-Guildwood, wants the climbers to pay for the rescue, which can cost thousands of dollars, in order to discourage the “misadventure.”

“Rescues by misadventure along the Scarborough Bluffs are on the rise,” Ainslie wrote in a letter to a city council committee. “The actions of these individuals are placing a strain on our city resources diverting staff from other unforeseen emergencies.”

Toronto Fire has said these types of rescues are becoming routine, with stranded hikers having to be hauled down about once a month by specially trained crews. 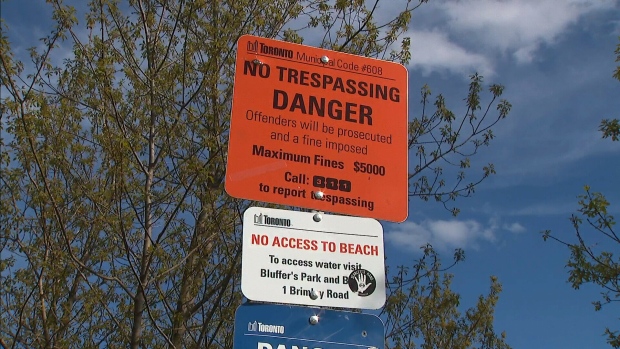 Mayor John Tory said Tuesday that Toronto Fire Services told him Ainslie’s proposal would not be the “wisest” thing to do and can possibly have “tragic” consequences.

“They don’t want people who find themselves in that dangerous circumstance to be reluctant to call the fire department because that could lead to a loss of life,” he said.

“The real key to this is for all of us to educate people not to go on the Scarborough Bluffs in the areas that are marked very clearly as areas people should not go.”

Tory said people should “certainly” be charged, and fined for climbing the bluffs, but said he agrees with the fire department..

He said people who climb the bluffs are potentially putting other people in the city at risk by tying up emergency resources.

“I hope people can come to their senses and stop this foolish behaviour that has gone on for many years,” he said.

Ainslie’s proposal will be considered Wednesday at the Economic and Community Development Committee.