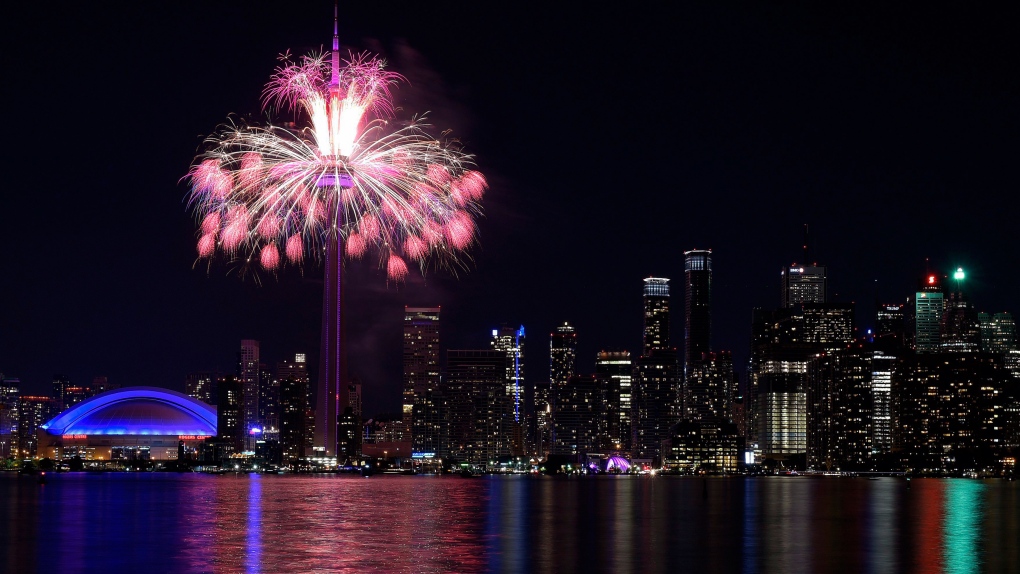 Fireworks light up the downtown Toronto city skyline during the closing ceremony for the Pan American Games in Toronto on Sunday, July 26, 2015. (Nathan Denette / THE CANADIAN PRESS)

It might be a year-and-a-half away, but one Toronto city councillor is looking to start 2017 with a bang.

Coun. Jim Karygiannis wants city staff to research the costs of shooting off fireworks from the CN Tower to mark Canada's 150th birthday. The country will mark the major milestone with Confederation celebrations planned coast to coast throughout the year.

The Scarborough-Agincourt councillor hopes to kick off the year-long party when the clock strikes midnight on Jan. 1, 2017.

Karygiannis' request is outlined in a member motion to be discussed during a City Council meeting held Tuesday and Wednesday.

The specific costs have yet to be estimated, but the motion asks staff to request a supplement from the Canada 150 Fund, money set aside by the federal government for country-wide events.

The CN Tower has been used as a launching point for milestone fireworks shows before. To mark a new millennium in 2000, thousands of pounds of explosives were fired from the sides and top of the Tower.

Karygiannis' motion also points to the Pan Am Games' opening and closing ceremonies, saying thousands of volunteers and visitors were captivated by the "spectacular" displays.

"These events were feats of pyrotechnic design and engineering," he wrote in the motion.

Karygiannis notes that the CN Tower is recognized as one of the "Seven Wonders of the Modern World," outlined by the American Society of Civil Engineers.

"Displaying fireworks from these distinctive venues would be an impressive 'kick off' to the City of Toronto's Canada 150th Anniversary and 2017 New Year's celebrations," he wrote.

The motion will go to council Wednesday afternoon.