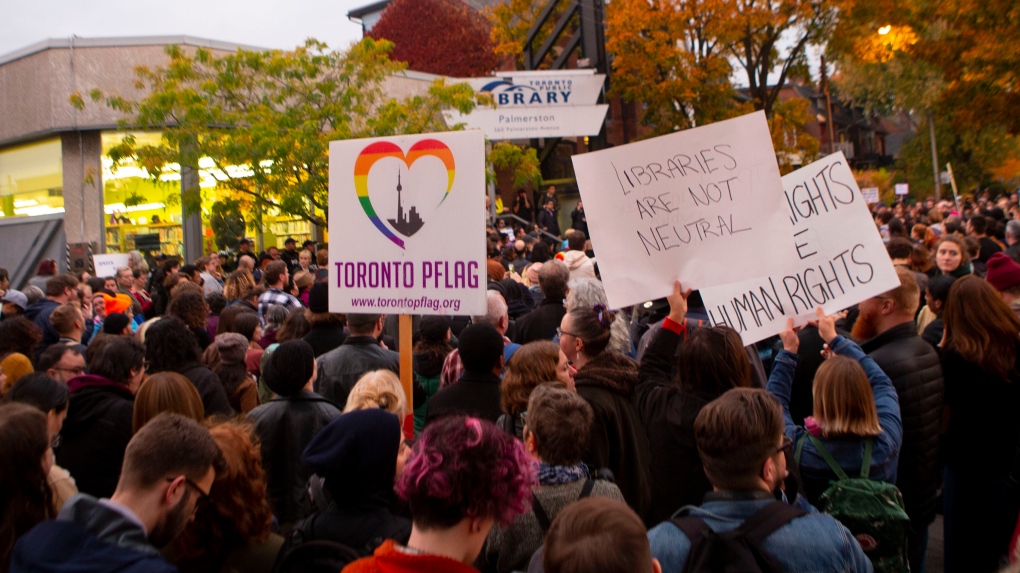 Transgender activists gather outside a Toronto Library before Meghan Murphy speaks at an event on Tuesday October 29, 2019. (THE CANADIAN PRESS/Chris Young)

TORONTO -- The day after a widely-criticized appearance by a controversial writer at a Toronto library, city council has called for a review of the rules governing the use of municipally-run community spaces.

“I do think that public venues that are publicly-funded by taxpayers should be held to a higher standard,” Coun. Kristyn Wong-Tam told CTV News Toronto on Wednesday.

Wong-Tam introduced a member motion to city council asking her colleagues to support a staff analysis of whether the existing lease and permit rules for city facilities properly reflect the city’s commitment to equity, diversity and anti-harassment.

Her request passed 20-1, with only Stephen Holyday opposing.

“We don’t necessarily want to dictate exactly what our senior city staff are to do when we delegate the authority, but to question whether or not they’ve reviewed certain evidence, and to ensure that the policy is a strong policy, I think is well within our right,” Coun. Mike Layton said.

Toronto library officials came under fire for renting out a room of a downtown branch to Meghan Murphy, a writer and speaker who believes Trans women endanger Cis women and undermine women’s rights. Toronto Public Library executives defended the decision by saying that Murphy’s appearance did not violate the board’s definition of hate speech.

“Trans rights are human rights, and clearly the human rights code hasn’t caught up to that, and thus if we have a policy that’s allowing discrimination to flourish in our libraries, we need to review and change that policy,” Coun. Joe Cressy said.

Wong-Tam’s motion pointed to what she believes are inconsistencies within the city policy. On Oct. 10, city staff cancelled the permit for the use of meeting space at the Pam McConnell Aquatics Centre after a group registered as “Christ’s Forgiveness Ministries” planned a rally in the Church-Wellesley Village, which LGBTQ2S community members perceived as an act of intimidation.

Tonight the @torontolibrary wrongly let a known transphobic speaker use public space to attack a Charter-protected group who are routinely and disproportionately targeted by hate & violence. My motion directs City Manager + Solicitor to review booking rules for all public spaces. pic.twitter.com/Oy4nHx30AU

In another instance, neo-Nazi figures held a memorial event at the Richview Public Library in Etobicoke in July 2017. Jewish organizations and human rights advocates were outraged, but according to Wong-Tam, the policies in place were insufficient to restrict the rental and the event was allowed to proceed.

The Toronto Public Library reviewed its protocols after that incident, and some councillors say that although they support another review, they believe the current protocols are appropriate and support freedom of expression.

Here's our updated comment on the upcoming third-party room rental event, as well as answers to questions we've been seeing: https://t.co/1BEmlVHT7T

“Most of the time I’ve seen that the existing policies do the trick, and when applied properly, the right decisions are made,” Deputy Mayor Denzil Minnan-Wong told CTV News Toronto.