One person is dead and another person is in critical condition after an apparent shooting involving moving vehicles on Highway 410 in Brampton.

The shooting took place in the northbound lanes of the highway between Bovaird Drive and Sandalwood Parkway at around 2:30 a.m.

Police arriving on scene located the two shooting victims in a vehicle stopped on the highway and then attempted to box in an Audi that was observed on scene and deemed to be suspicious. 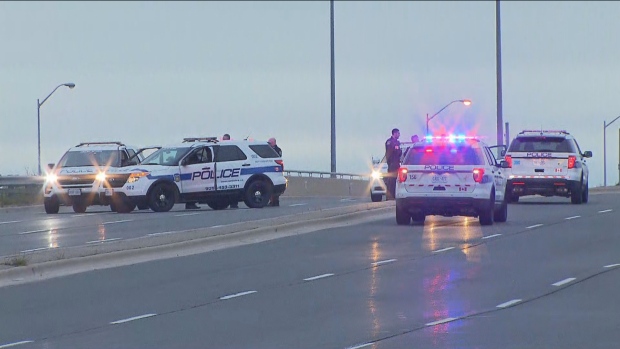 Police investigate after a shooting on Highway 410. (CTV News Toronto)

The Special Investigation Unit says that vehicle then reversed, prompting a Peel Regional Police officer to fire multiple shots at it in an unsuccessful attempt at halting its progress.

The vehicle was later found abandoned and riddled with bullet holes on Checkerberry Crescent, which is just east of Highway 410.

The SIU is looking into the circumstances surrounding the police interaction with the Audi while Peel Regional Police are leading the investigation into the initial shooting.

“The SIU is mandated to investigate any interaction where there has been serious injury or death. We don’t know what happened in this particular case yet as we haven’t located the occupants of the vehicle but police have an obligation to notify us whenever there is an incident that could possibly fall under the SIU’s mandate,” spokesperson Monica Hudon said at the scene on Monday afternoon. “An officer discharged his firearm, a vehicle was struck and somebody may or may not have been injured so we need to be called in so that we can start fresh right at the beginning and we will see whether this is something that we will continue to investigate.”

Hudon said that investigators will be examining the suspect vehicle as part of their investigation and are also looking to speak with anyone who witnessed the events that transpired on Highway 410.

“All I know right now is that multiple shots were fired at the vehicle,” she said. “Whether you witnessed what happened on the highway between police and the vehicle or what happened leading up to when the vehicle was abandoned we would like to hear from you.”

Police have said that the two victims in the initial shooting, believed to be men in their 20s, were both found in a vehicle that was stopped just south of Sandalwood Parkway.

One of them was pronounced dead at the scene while the other was rushed to a trauma centre. 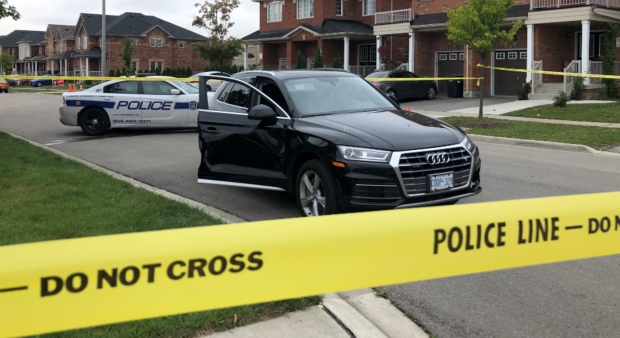 Const. Heather Cannon told reporters earlier on Monday that police are dealing with “multiple crime scenes,” though she refused to comment on how many.

She also refused to comment on whether a reported carjacking involving a black Honda Pilot being operated as an Uber in the area where the suspect vehicle was located could be related to the police investigation.

She said that right now investigators with the SIU “are working alongside” forensics investigators, who are searching for evidence on Highway 410.

She said that homicide detectives will also be canvassing for witnesses and video footage.

“At this particular point homicide is canvassing the area. Anyone that has any dash cam video or anything that can assist the investigation we are looking for,” she said.

Police have notified area hospitals to be on the lookout for potential shooting victims.

Highway 410 was closed in both directions between Bovaird Drive and Mayfield Road for most of the day, but reopened around 8:30 p.m.