A replica of the Avro Arrow has been returned to Mississauga, the site where the legendary Canadian-designed jet fighter was developed in the late 1950s.

The 26-metre replica jet was transported by convoy overnight Sunday from Toronto's Downsview Park to the International Centre, close to Pearson Airport, where it will be put on public display for the first time in two years.

The move was several days in the planning. First, the aircraft had to be loaded onto three trailers equipped with specially created shipping cradles and supports. The resulting convoy had to travel with a Toronto police escort, much like when NASA's Space Shuttle Endeavour travelled through the streets of Los Angeles to its new home in 2012.

The jet was moved almost fully intact, although some parts, including the replica's wing tips, rocket pod and nose gear had to be moved separately. They will be reinstalled next week.

Though the drive from Downsview to the International Centre in Mississauga is typically only about 18 kilometres, the convoy had to travel a full 40 km along Highway 7, to avoid low bridges and tight turns.

The jet had been housed at the Canadian Air & Space Museum at Downsview Park. But the park evicted the museum in September, 2011, to make way for an ice rink complex.

So the replica is heading to a new home in a storage facility near Pearson Airport. But first, it will be front and centre at the SME Canadian Manufacturing Technology Show, which runs at the International Centre from Sept. 30 to Oct. 4. All members of the public will have the opportunity to see the Arrow ahead of the show during “Doors Open Mississauga” at the International Centre on Saturday, Sept. 28.

Kenneth Swartz, a member of the board of directors for the museum, told CTVNews.ca Saturday that the journey represents a symbolic return home, as the original Arrow was built on Airport Road just steps from the International Centre.

“Some of the buildings at the International Centre were actually part of the Avro (Canada) factory,” Swartz said.

Once considered a major feat in aviation technology, the Avro Arrow was unveiled to much fanfare in 1957. But, less than two years later, the program was cancelled and the fleet destroyed.

Decades later, a determined group of volunteers that included war veterans and aviation industry retirees set to work re-creating the scrapped aircraft “to fill a gap in local Toronto history,” Swartz said. Volunteers began work  in 1998, and the full-scale model was completed in 2006.

As for the Aviation Museum, Swartz said the board is still actively trying to find it a new home near Pearson. 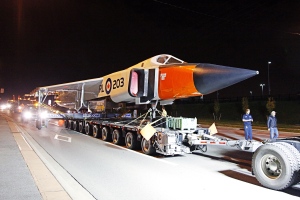