Construction worker unaccounted for after industrial accident in Mississauga

Construction worker unaccounted for after industrial accident in Mississauga

The search continues for a missing construction worker believed to have been trapped underground after an industrial accident in Mississauga on Friday afternoon.

Emergency crews responded to the area of Hurontario Street and Burnhamthorpe Road shortly after 3:30 p.m. for reports of flooding at a work site.

Mississauga Fire platoon chief Ryan Baird said they were notified that one worker was trapped in an underground tunnel with water rapidly rising.

"There was a lot of water down there. It's a large chamber with a lot of pipes feeding the chamber, so we had to get the leak stopped first. The region and the contractor have done that," Baird said.

He noted that they don't know the source of the leak, but Peel police told CP24 that a pipe ruptured.

Police added that all but one worker safely got out.

"We don't know the condition of the person," Baird said. As of 11 p.m., there was still no word on the missing worker. 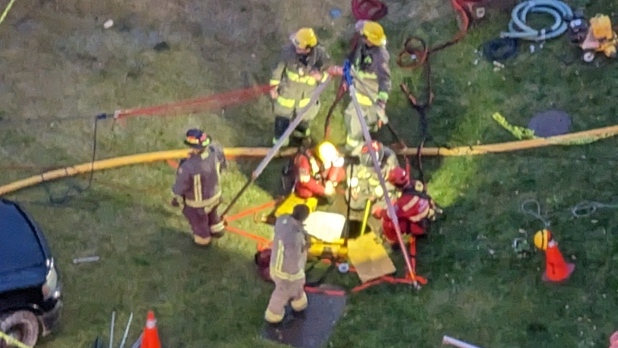 Emergency crews respond to an industrial accident in Mississauga, Ont. on Dec. 2, 2022.

Crews had been pumping water out of the chamber so rescuers could enter and conduct a search.

"We have … three different lines that are down there trying to get this water out as quickly as possible," Baird said.

The cause of the leak is unknown. Watermain and sanitary sewer improvement work is being done in the area.

Police have closed the intersection.