A Scarborough man attending his first concert after recovering from a horrific motorcycle crash says his wheelchair accessible ticket didn’t allow him to see one of his favourite artists.

“I was totally devastated. I couldn't see the jumbotrons. I couldn’t see the band,” Scotty Shier told CTV News Toronto.

Shier and his partner Karen Williams say that their lives changed forever when Shier was stuck by a car while riding his motorcycle in Bobcaygeon last November. He was left with life-altering injuries.

“It's been hard accepting being a quadriplegic. I was just a normal guy and now I’ve lost everything." 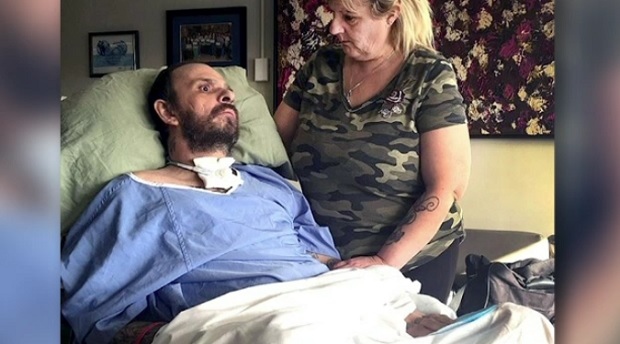 Scotty Shier was severely injured after his motorcycle was struck by a car last November. (CTV News Toronto)

The couple has a love of music, so Williams decided to buy tickets to see the heavy rock band Iron Maiden. They purchased wheelchair accessible seats in March for the August 19th show. Shier says he was looking forward to getting out and seeing live music.

“I was excited to go. Karen said we can still do the same things, we just have to do them differently.”

The couple said the tickets were about $200 and transportation to the Budweiser Stage was also about $200. They say that when they got there they were shocked where Shier had to sit.

Williams says that Shier was on a cement slab behind other seats and as soon as the concert started, everyone stood up—blocking their view.

The couple felt the area was not suitable for someone in a wheelchair and left after two songs.

“I had beer spilled on me. I was burned with cigarettes and banged and bumped,” Shier said.

Due to a death in the family, the couple said they couldn’t deal with the ticket issue right away. They did eventually ask for a refund from Ticketmaster, but were told that because one month had passed since the concert, their refund was denied.

A spokesperson for Live Nation told CTV News Toronto that on the Budweiser Stage’s website it does say that in certain sections “customers should be aware that if people in their section stand up, their view will most likely be obstructed."

The spokesperson also said now the couple will get a full refund.

Williams says the seating arrangement at the venue should be changed.

“I don't want anyone to go through what we went through.”