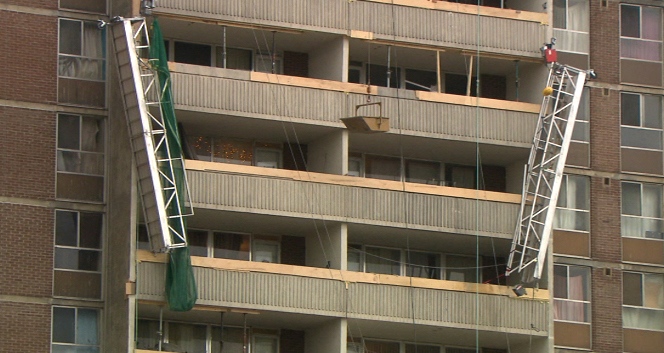 The broken scaffolding lies handing on the side of the building as Ministry of Labour officials investigate the incident, Friday, Dec. 25, 2009. The scaffolding couldn't immediately be removed as it was deemed too dangerous.

TORONTO -- An Ontario construction company was fined $200,000 Friday for criminal negligence after four immigrant workers plunged to their deaths in a scaffolding accident in 2009.

The conviction for criminal negligence causing death against Metron was the first of its kind in Ontario under the Criminal Code.

The incident occurred on Christmas Eve in 2009 when high-rise scaffolding snapped from a building in Toronto, causing four workers - Alesandrs Bondarevs, Aleksey Blumberg, Vladamir Korostin and Fayzullo Fazilov - to fall 13 floors to their deaths.

A fifth worker, Dilshod Marupov, survived the incident but sustained serious injuries. A sixth worker, the only one properly wearing a full-body safety harness, was pulled to safety.

Bigelow also ordered the company to pay a $30,000 victim surcharge fine, which goes into a special fund to assist those affected by crime in the province.

Metron Construction has to pay $100,000 within 30 days and the remainder within 12 months.

Bigelow sentenced the owner of the company, Joel Swartz, to pay $90,000 plus a $22,500 victim surcharge fine for four charges under the province's Occupational Health and Safety Act.

"Health and safety legislation exists to protect workers from serious injury or death in the workplace and the overriding principle to be considered by the court is that of deterrence, and any fine imposed must be substantial enough to warn others that the offence will not be tolerated," said the judge.

He also noted that the fine amounts reflected the ability of the company and Swartz, a father of four, to pay. Metron Construction's yearly earnings have dropped by 50 per cent since the accident.

The Crown had originally asked Bigelow to impose an unprecedented $1 million fine for the deaths.

Neither Swartz nor any of the victims' families were present at the proceedings Friday.

Outside court, Sid Ryan, head of the Ontario Federation of Labour, called the fines a "disgrace."

Labour activists had said they had wanted to see jail time, not just financial penalties.

"I believe employers in this province, in some cases, have been getting away with murder in the sense of killing workers every single day," said Ryan.

"The only way we can stop the carnage in the workplace is actual jail time."

He said the surviving victim in this incident had been seriously maimed and may never work again.

The only message that Bigelow sent was that in the future, companies will have to "build the cost" of these accidents into their business plans, Ryan added.

A Ministry of Labour investigation later found that safety measures like a fall-protection system were not in place when the workers went up on the 12-metre scaffolding floor of the high-rise building.

The workers floor had been overloaded and defective.

The company also admitted to not keeping proper training records or ensuring that the scaffold was properly maintained.

Between 80 and 90 workers a year die in Ontario on average in workplace mishaps, according to provincial statistics.