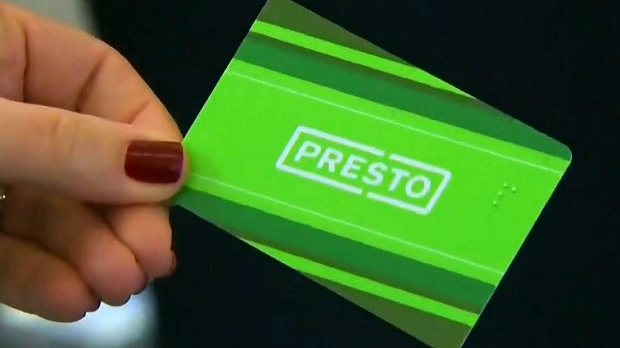 A Presto Card is shown in this undated photo.

Commuters will soon be able to load a new PRESTO card with as little five cents but they will still have to shell out $6 for the card itself.

Metrolinx has announced on its blog that it is lowering the minimum amount of money that can be loaded onto a PRESTO card from $10 to five cents.

The change will mean that rather than having to shell out at least $16 to purchase a new card and load it with the minimum balance, commuters will now be able to do so for $6.05.

The change will be particularly helpful for parents of children under the age of 12, who previously had to purchase a PRESTO card and load it $10 just to take advantage of the TTC’s kid’s ride free initiative.

“We know the minimum load requirement is a concern among our customers, who see it as a barrier to switching to PRESTO,” Executive Vice President of PRESTO Annalise Czerny said in the blog post. “By taking this first step in lowering it to five cents across in-person retail and service outlets, we’re making it easier for more people to discover the many benefits of getting a card, whether it’s automatic top-ups when funds get too low or balance protection on lost or stolen cards.”

Metrolinx says that the five cent minimum balance requirement will go into effect for customers at Shoppers Drug Mart and other in-person outlets, including GO customer service counters as of Oct. 28.

The transit agency says it will then be introduced for all self-service machines and online transactions “in the near future after additional software changes are tested and rolled out.”

In the blog posts, Czerny said that Metrolinx would have preferred to just eliminate the minimum load requirement entirely but couldn’t have done so without costly technical changes.

“Lowering the minimum load to five cents is the lowest option available since the penny is now obsolete. Removing it entirely would require substantial technical changes that would take a while and be costly to roll out, and this solution is something that can be put in place immediately,” she said.

The TTC plans to phase out tokens in favour of Presto by the end of 2019.

The transit agency previously phased out paper metropasses at the beginning of 2019.