TORONTO -- Crews continue to clean up roads across the GTA following a messy mix of precipitation that has slowed traffic.

Early Monday, a winter weather travel advisory was issued for the City of Toronto, as well as the regions of Peel, Halton, York, and Durham after significant accumulation overnight.

While Environment Canada cancelled all advisories for the region Monday afternoon, the cleanup effort continues. Salt trucks and snow plows are out across the region to clear up slippery streets.

Mark Mills, the road operations superintendent for the City of Toronto, told CP24 earlier Monday that the city's entire fleet of plows would likely be out today, but it could take a while.

"(Plowing) will take about 14 to 16 hours. We’ll have the sidewalk plows out early this morning and of course we are going to get those bike lanes cleaned up too." 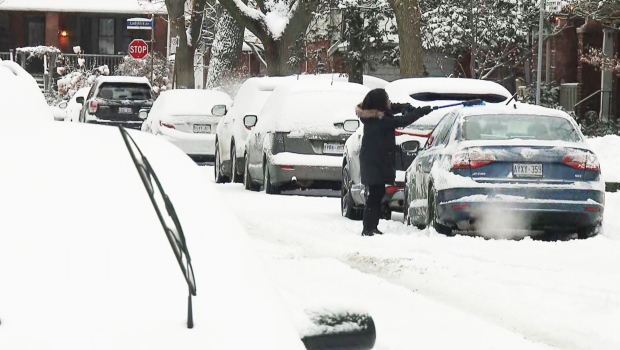 A winter storm on Sunday brought a mix of ice pellets, freezing drizzle, and snow to the GTA, resulting in hundreds of collisions.

OPP Sgt. Kerry Schmidt said more than 500 collisions were reported in the GTA over a 24-hour period and police continue to urge motorists to exercise caution.

"The plows have been out trying to keep up with the snow that continues to fall but the roads themselves are still very snow-covered, very slippery," OPP Sgt. Kerry Schmidt told CP24.

"Drivers need to pay extra attention when they are trying to merge with traffic and just drive on the lanes." 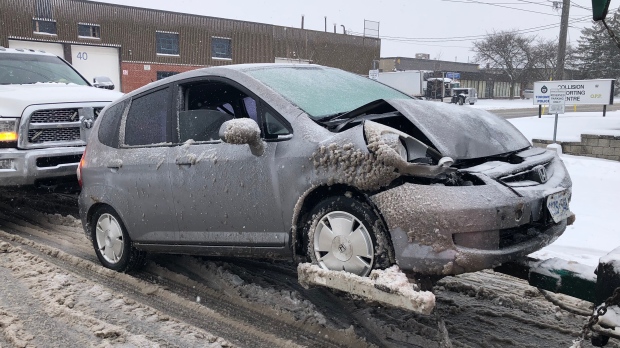 Power outages were also reported in Toronto and the surrounding region, including the Hamilton area.

Plenty of delays on the @TorontoPearson #YYZ departures board inside Terminal 1 this morning...
Check ahead before you fly
More on @CTVToronto @ 12 w @michelledubeCTV pic.twitter.com/J6FVKlAqDY