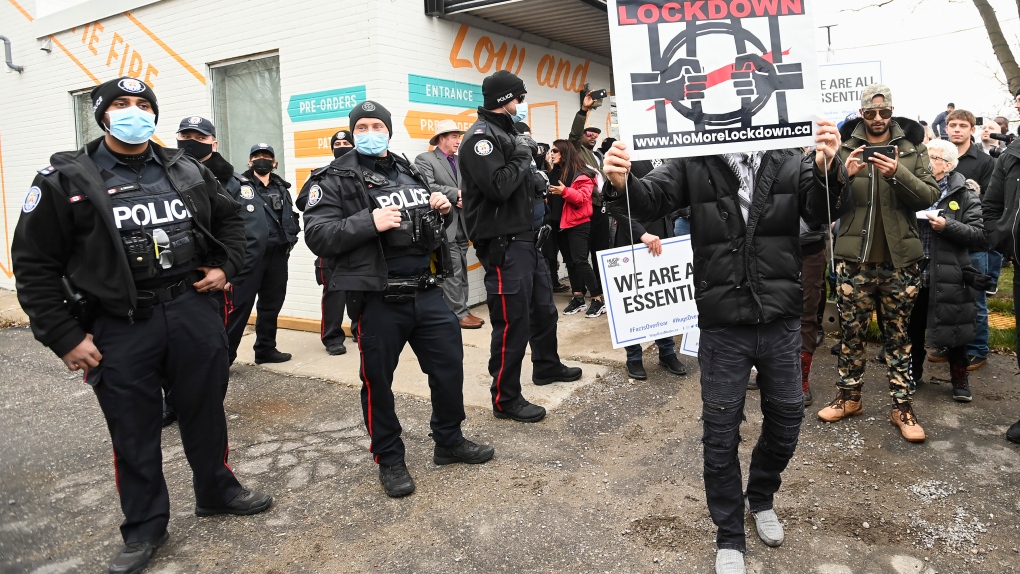 Police officers monitor the situation at Adamson Barbecue as the restaurant has defied provincial lockdown orders to shut down indoor and outdoor dining during the COVID-19 pandemic in Toronto on Wednesday, November 25, 2020. THE CANADIAN PRESS/Nathan Denette

TORONTO -- A civil liberties lawyer says a decision by the City of Toronto to bill a restaurant owner nearly $200,000 to cover the cost of enforcing lockdown regulations raises concerns about people's constitutionally protected right to protest.

Cara Zwibel, the director of the fundamental freedoms program with the Canadian Civil Liberties Association, said the idea that individuals should have to pay for the opportunity to exercise their freedom of expression and freedom of peaceful assembly is concerning.

There are significant costs to policing a wide variety of matters, she said, but criminals don't pay the policing costs associated with those crimes.

"There is a concern that the city is not treating this as part of their normal operations," Zwibel said.

"But this is what police do, they enforce the law and keep the peace, that's the cost of doing business as a municipality."

Skelly repeatedly ignored lockdown rules when he opened his restaurant for indoor dining, which was banned under public health measures in place. He was later arrested for multiple violations of regulations imposed by Toronto and Ontario.

The city closed the restaurant and also said at the time that it would be investigating for compliance with business licensing, zoning, public health and building and fire codes.

A spokesman for the city said this week that businesses that have violated the law and have been ordered to close have remained closed, making Adamson Barbecue an exception.

"There was a significant amount of time that the police and city incurred in dealing with this issue in terms of his opening the establishment and our need to close it under public health orders," Brad Ross said in an interview.

The invoice was sent to Skelly in December but has not yet been paid, he said, adding that the city is considering launching a civil suit to recoup the money.

Ross said this is the first time the city sends an invoice to someone during the COVID-19 pandemic.

Prior to the pandemic, he said a business or resident was billed for not clearing a sidewalk of snow, leaving the city to do the work - but those cases were not common.

Zwibel said there is already a system in place to deal with people who break the law: the justice system.

The "pay-to-protest" issue has come up in the past, she said, especially on university campuses.

If a topic of a planned protest is a hot-button issue and the event is expected to attract a large crowd, universities have tried to have organizers pay for security.

"The universities will sometimes say 'well, there's going to be a big reaction to that and so we're going to need security, and so you're going to have to pay for it," Zwibel said.

"I would say it's not appropriate to have to pay to exercise your constitutionally protected right to protest."