TORONTO -- The City of Toronto has asked the owner of an Etobicoke barbecue restaurant to pay the $187,000 in costs that it incurred while attempting to enforce public health restrictions at his business.

Medical Officer of Health Dr. Eileen de Villa eventually ordered the closure of the business after Skelly refused to close and the locks were changed.

But Skelly attempted to gain access to the premises by allegedly breaking through a wall that separated it from an adjoining area that he was allowed into. That’s when he was arrested and charged with several criminal offences, including mischief and attempting to obstruct police.

For days police were ordered to stand guard at the business to help control the crowds that had gathered and prevent Skelly from reopening.

On Monday, city spokesperson Brad Ross confirmed to CP24 that the city did send a “demand letter” to Skelly in December asking that he cover the $187,000 bill associated with enforcing the public health restrictions. 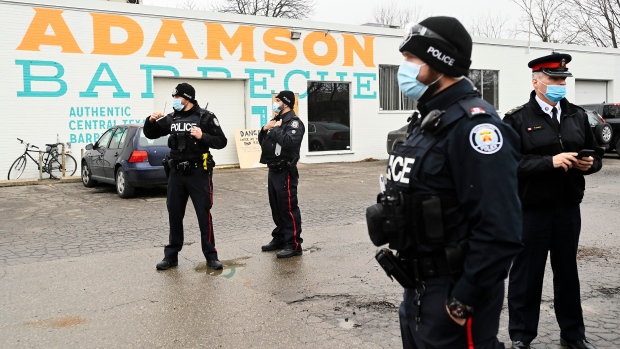 He said that should Skelly not comply the city will pursue legal action with the “next step” being the filing of a formal statement of claim.

It is not clear whether Skelly intends to pay the invoice, though he did reportedly take to Instagram over the weekend to post an image of the letter alongside a poll asking his followers whether he should.

A Go Fund Me to cover Skelly’s legal costs previously raised more than $300,000.