Councillor Denzil Minnan-Wong says he plans on putting forward a motion asking what city staff are doing to stop the practice, detailed in upwards of 300 tickets issues by automated speed enforcement cameras and red light cameras — and whether city staff are facing the same punishment as any other driver.

“Our own city employees have heavy feet and are speeding,” Minnan-Wong said in an interview Monday. “I think it’s really important we have a discussion about city vehicles and our own staff. If we can’t get our own employees to follow the laws, how can we get the public to do the same thing?”

Councillor Jennifer McKelvie said through a staff member she “is planning to ask some questions related to both the infractions and collections of funds.”

The councillors were responding to a CTV News Toronto investigation that obtained, through a freedom of information request, 326 tickets issued by automated enforcement machines over the first year of the machines’ operation, starting July 1, 2020.

Among the photos on the tickets were at least 20 speeding garbage trucks, including one caught speeding outside a Milne Valley Middle School in North York school as it let out for the day.

There were more than two dozen specialty vehicles, including dump trucks, vehicles with heavy equipment, and ones carrying fluid in bulk in the tickets.

And among the sprinter vans, smaller cars and pickup trucks in the remaining tickets were at least two bylaw enforcement vehicles. 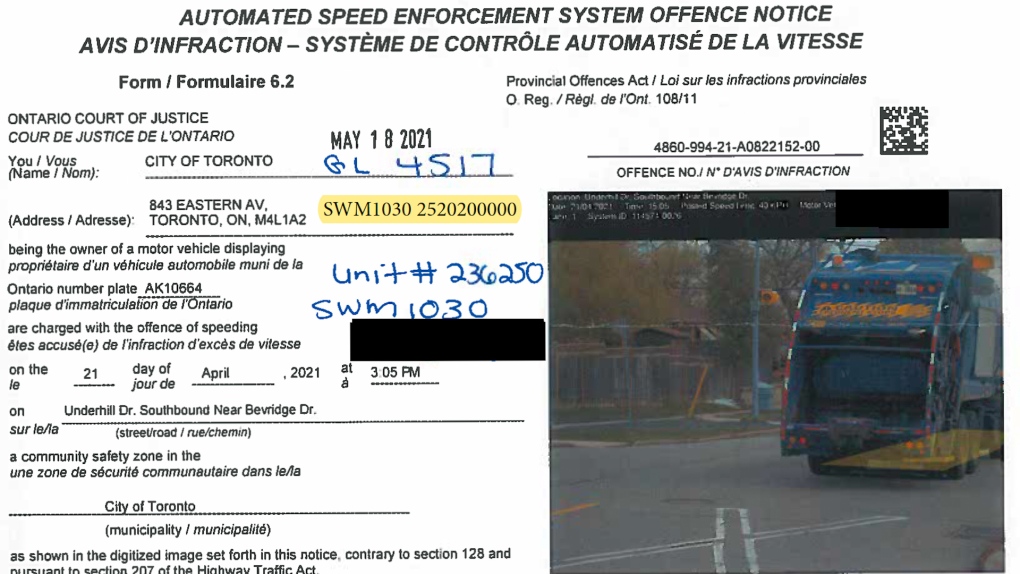 A speeding ticket is issued to the driver of a Toronto garbage truck, obtained through a freedom of information request.

“I find it shocking and really unacceptable,” said Jess Spieker of Friends and Families for Safe Streets. “When you see a city truck or a corporate operator you would assume that operator would be held to a higher standard.”

But some of the fines meant to deter the worst outcomes won’t ever be paid by some city employees.

That’s because the city pays the fines first, as the owner of the vehicle. Then it must collect that from the employees themselves. Its efforts had been troubled that year by a lack of a centralized system and manual efforts.

Of the $31,914 in fines incurred in that one year period, the city projects it won’t be able to recover $2,495. Much of that comes from the solid waste management division, where the city has projected it will only be able to recover some 70 per cent of the fines that were issued.

The city has said that agency is doing a review of its employee fine management process, and said on Monday in a statement they "are nearing completion on the implementation of a centralization process that will simplify the recoveries.” 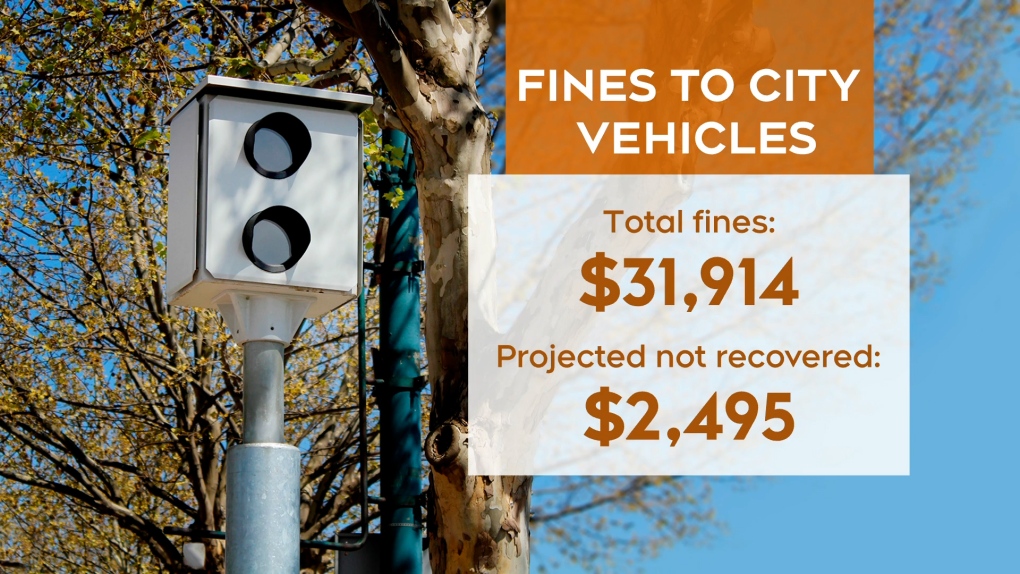 While the TTC and Ontario’s ministry of transportation told CTV News Toronto how fast each vehicle was going in separate FOI requests, the City of Toronto has refused to do that on security grounds.

The city argued that if a vehicle’s speed was disclosed, citizens could work out what threshold the machines were set at and game the system by speeding slightly over the limit.

The highest speed clocked, the city says, was nearly twice the speed limit: 54 km per hour in a posted 30 km per hour zone.

That doesn’t make sense, said Spieker, pointing out that both the vehicle size and its speed determine how potentially deadly the crash is, making the general data much less useful.

“The employee is doing something that is flagrantly illegal. The public has a right to know about this. It’s not ‘just speeding’. The relationship between speeding and violent death is not linear, it’s exponential.”

Multiple studies have shown the effectiveness of the 50 speed cameras in changing driver behaviour at those locations, which are posted to drivers but change regularly.

The Infrastructure and Environment Committee is considering whether to add another 25 cameras, and also to forge an agreement with Quebec so as to be able to ticket roughly 1,500 vehicles with Quebec plates that have been photographed by the cameras.

Onlookers urged police officers to charge into the Texas elementary school where a gunman's rampage killed 19 children and two teachers, a witness said Wednesday, as investigators worked to track the massacre that lasted upwards of 40 minutes and ended when the 18-year-old shooter was killed by a Border Patrol team.