TORONTO -- The City of Toronto is scrambling to figure out how much its employees owe in automated speeding and red light camera tickets after questions from CTV News Toronto.

The confusion is thanks to the way the city handled the $85,000 in tickets it issued over the past year to many of its own employees: it pays up front, and then tries to recover the cost from the worker behind the wheel.

At last count, the city could verify that $14,000 had been repaid — under 20 per cent — though the figures are in flux as staff reach out to the city’s divisions and agencies, which are individually responsible for enforcing the policy.

Amid questions from critics about whether all drivers are being treated equally by the automated cameras, Toronto Mayor John Tory says he’s ordered a fix to avoid the appearance of a “two-tiered" system.

“These numbers only came to my attention thanks to the good work of CTV News, and I’m not satisfied with them,” Tory told reporters at a news conference Tuesday.

“We have to do a better job, they’re on it, finding a better way to make sure these fines are collected,” he said.

Many drivers pay to avoid consequences to their license or a lengthy appeal. The city says as the owner of the vehicle has to pay up front to avoid legal consequences down the road. 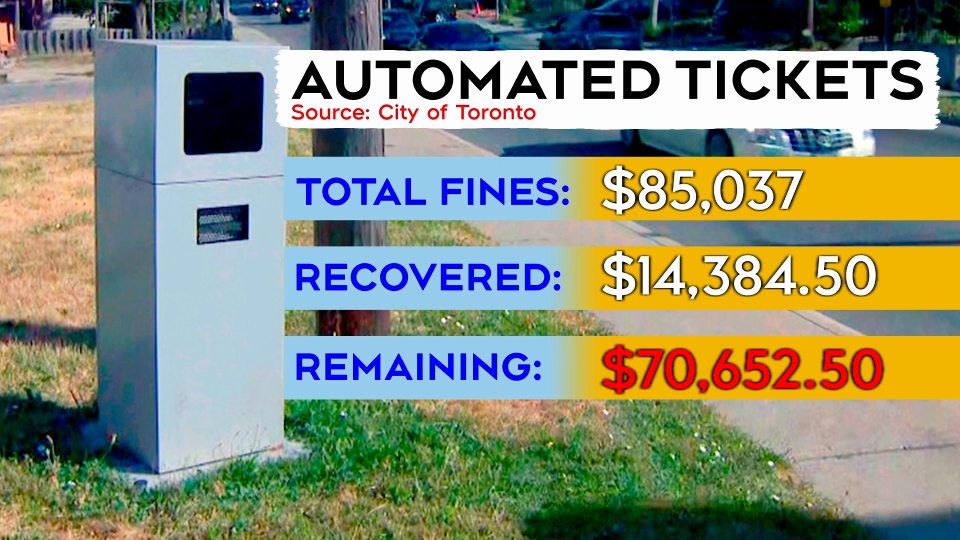 Figuring out who drove a city vehicle is a bureaucratic headache because the city has thousands of vehicles and thousands of employees who might have been behind the wheel.

On top of that, city staff said the automated cameras are relatively new, and staff say it has been difficult to track tickets during the COVID-19 pandemic.

The city said that it also has programs that focus on “awareness, promoting prevention and addressing critical issues such as repeat violators or high speed offenders rather than the monetary recoveries, which remain the responsibility of supervisors and staff.”

Jay Goldberg of the Canadian Taxpayers Federation said if city workers aren’t consistently asked to pay their fines, then one incentive for driving safely is removed.

“If this is genuinely a question of public safety, then everyone across the board needs to be paying the same fines at the same rate,” he said.

City Councillor Stephen Holyday, whose ward was briefly the most-ticketed in the city by automated means, said he expects employees to be held accountable.

“It is my expectation that city workers are operating vehicles and equipment safety and according to the rules of the road. It’s important to set an example to the public.”

Some City of Toronto agencies operate differently than others. The Toronto Transit Commission told CTV News Toronto that it simply forwards its tickets to the driver and has no role in repayment.

The City of Toronto’s Fire Services said it had received nine red light tickets to date, which have all been forwarded to staff for payment directly.

Fire vehicles received 44 automatic speed enforcement tickets, worth $4,262.50, and it was appealing $2,311 worth of tickets on the grounds they were issued while the vehicle was responding to an emergency.

Paramedics appealed 33 out of 50 speeding tickets since August.