TORONTO -- City-owned vehicles, including buses, ambulances, fire trucks and police cars, have been ticketed for speeding and running red lights twice a day for the past year by Toronto’s automated enforcement system.

Some drivers appear to be breaking traffic rules in the course of regular driving, while others appear to be getting tickets while on emergency calls — an unexpected side effect of the degree of automation writing hundreds of thousands of tickets a year requires.

“We want to catch anyone who is driving unsafely,” said Toronto City Councillor Shelley Carroll, who has been a proponent of the camera program as a route to reduce road fatalities.

“As it turns out, sometimes that’s our own employees,” she said.

That all adds up to 743 tickets in the past year — a rate of about two per day. 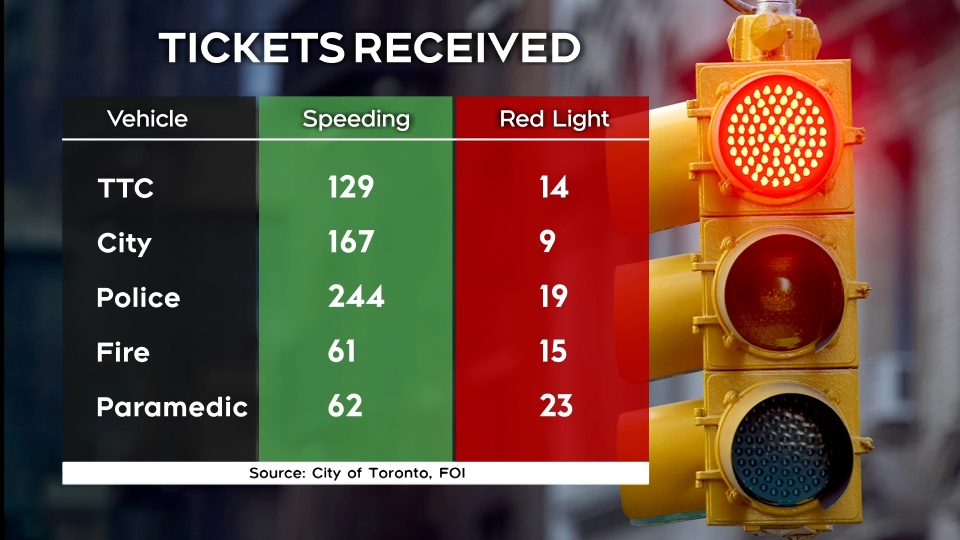 The volume is much higher than anticipated, Carroll said, but no one expected that drivers in Toronto in general would trigger upwards of 200,000 pictures taken by the cameras in a year.

“Every part of the process is automated. Not just the speed camera, but generating the tickets,” she said.

City employees receive the red light tickets and have to show that they were speeding as part of an emergency response to avoid paying fines that can be as high as $325.

“We receive red light and ASE [automated speed enforcement] tickets the same as any other person or entity in the city. We have developed a process in line with City policy that allows for any ASE tickets to be quashed if they are generated in response to an emergency incident, with sufficient documentation,” wrote Debbie Higgins, Deputy Fire Chief.

Breaking traffic rules can be deadly, and the same holds for city vehicles. One woman died when a TTC bus ran a red light back in 2013. A firefighter was charged with careless driving after a fire truck hit an 11-year-old girl last year.

Ontario’s Highway Traffic Act requires emergency vehicles come to a complete stop at a red light— so officers will pay any related tickets, officials said. The pictures are reviewed by a Provincial Offense Officer before the charge is laid, officials said.

Much of the time, the professional drivers have to worry about other drivers running reds or speeding, and the statistics bear that out. The 743 tickets make up less than half a per cent of the 196,363 speed tickets and the 67,119 red light tickets issued since July 1, 2020.

The automated speed cameras were installed as part of a push to lower the number of people dying on Toronto’s roads. But more effort is required than just ticketing people, said Amanda O’Rourke of 8 80 Cities, a non-profit that focuses on mobility and public spaces.

“We know speed kills,” she said, but added that drivers tend to pick a speed based not necessarily on the speed limit, but often on design features of roads meant to move vehicles at speed.

“We need to re-engineer our streets to prioritize vulnerable road users rather than prioritizing moving cars quickly,” she said.

That means bigger curbs, narrower lanes, pinch points, and other changes that drivers have been shown to react to more — but that costs money, she said.