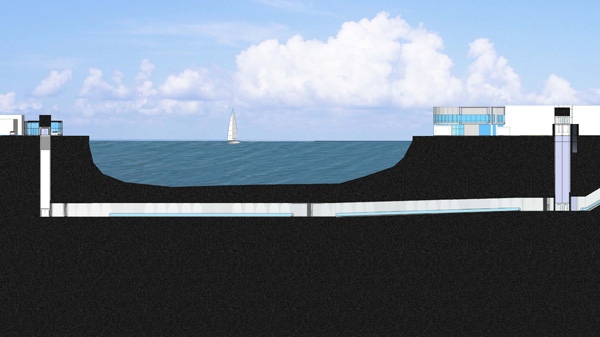 An artist's rendering of the underwater pedestrian tunnel that has been approved city council. (Image courtesy of NORR Limited)

City council has rubber-stamped a deal with the Toronto Port Authority for the construction of a pedestrian tunnel to the city's island airport.

Under the agreement, the port authority will have the right to use city waterfront land for the proposed passageway's construction.

The deal also allows the city to install water supply and sewer infrastructure in the tunnel.

Both parties have estimated that the project will save Toronto taxpayers approximately $10 million.

However, the Toronto Port Authority is a federal agency and still needs the highest level of government approval before it can move forward with the proposed tunnel.

Plans for a link to the Toronto Island Airport have been in the works for a decade. There were once plans for a bridge to the airport which were squashed when former mayor David Miller took office.

The pedestrian tunnel project moved forward last February when the federal government moved to reverse a marine act amendment prohibiting "a bridge or similar fixed link" between the airport and the mainland.

"The City will continue to work collaboratively with the Toronto Port Authority to make the pedestrian tunnel project a reality," said City Manager Joe Pennachetti in a prepared release.