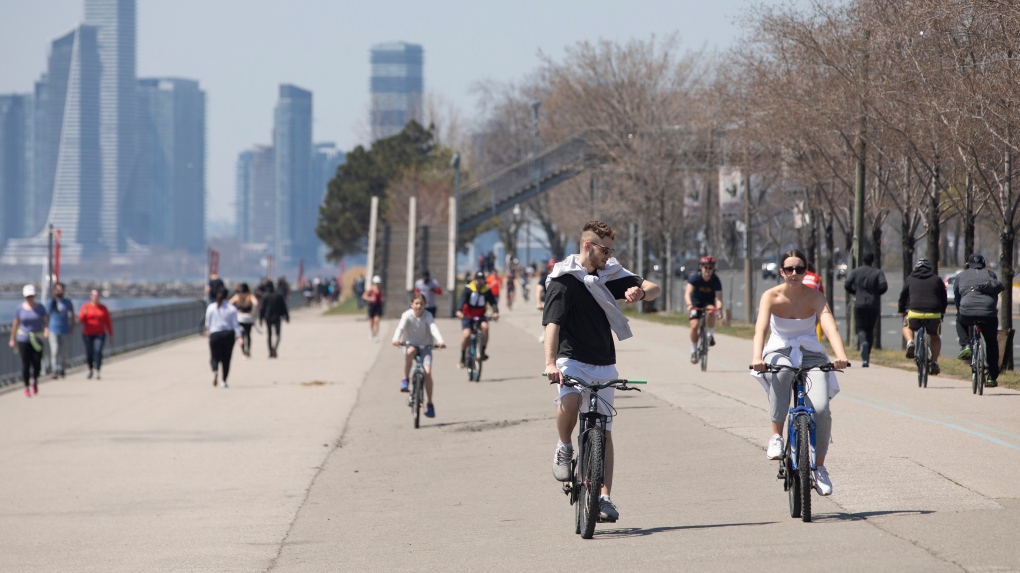 People exercise in the warm weather in Toronto, on Sunday, May 3, 2020. THE CANADIAN PRESS/Chris Young

TORONTO -- Cyclists and pedestrians will once again take over parts of Lake Shore Boulevard and Bayview Avenue this weekend following a decision by the city to extend its popular ActiveTO program into October.

Last weekend was supposed to be the final weekend for the pandemic-inspired program in 2020 but on Tuesday afternoon the city confirmed that it will continue the closures into October.

The city said that the decision is, in part, based on recent public health advice to limit contact with people outside of your household.

This weekend will mark the 21st consecutive weekend in which at least one major artery will be partially closed to create more room for cyclists and pedestrians.

According to data released by the city last week, an average of 18,000 cyclists and 4,000 pedestrians have taken advantage of the closures on Lake Shore Boulevard West on days without significant rainfall in June, July and August.

The closure on Lake Shore Boulevard East, meanwhile, has attracted an average of 6,300 cyclists and 5,700 pedestrians on summer weekend days while the one on Bayview Avenue has been used by upwards of 2,000 cyclist and 300 pedestrians.