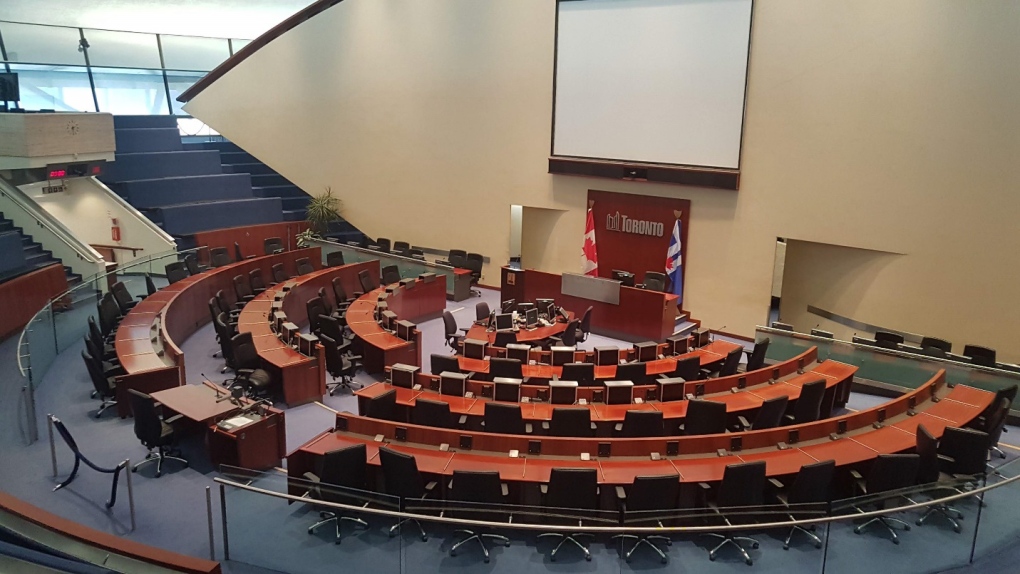 A motion has been put forward asking the city to look into “modernizing” the city council chamber to meet the needs of a smaller sized council.

The city clerk and executive director of the city’s corporate real estate management submitted a report on what would need to be changed in order to meet the needs of a council that was reduced from 44 members to 25 in 2018 due to a controversial decision by the province.

The report asked the city to undertake a $400,000 feasibility study and consider funding needed for the redesign. The request will be considered by the general government and licensing committee on Nov. 18.

“The current council chamber floorplan was designed for a council more than twice its current size,” the report said.

“A new floor layout would involve modular desks and other components to allow the chamber to be reconfigured effectively and timely.”

The City of Toronto said late September that it hoped the Supreme Court of Canada would hear its challenge to the provincial law that slashed the size of council last year.

Coun. Josh Matlow was critical of the proposed plan, saying it might be too early to say the chamber needs a redesign.

Unless the province intervenes again, Toronto will be able to decide on how many wards it should have to effectively represent the people of our city in future elections. Let’s not sell the furniture yet. Meanwhile, let’s work together to #EmpowerTO with a city charter.

He said that in next election, city council can decide how many seats are needed to best represent the city if the province doesn’t intervene again.

“What I don’t want to see is the chamber redesigned for a council that Torontonians didn’t choose … Toronto needs to decide how many wards it wants before we start selling our furniture.”

The report stated that this would not be the first chamber renovation project. It said the chamber was renovated in 1998 to accommodate a 58-member council, but was not changed when council shrank to 45 members in 2000. 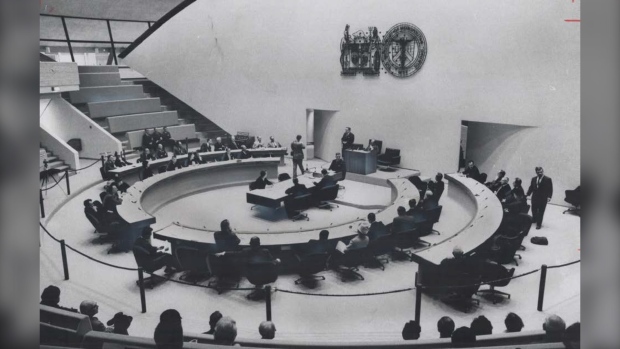 This is the original layout of the City of Toronto's council chamber at Toronto City Hall. At the time, City Council was composed of only 12 members.

The report said that the current furniture is fixed and cannot be easily reconfigured. A more adaptable space, it said, would ensure the design is “futureproofed” against any further changes in the size of council.

It said the current desks “predate” the modern “custom” of bringing tablets, notebook, mobile phones, chargers and other technology.

The report also found that the desks are narrow and the area is cramped, which is not accommodating to council members who have accessibility needs.

“A renovation would allow members' desks to be re-sized to give members more desk space and elbow-room,” the report said.

The report said that while the construction is underway, the council may have to meet elsewhere. If the plan is approved, the renovation is estimated to take until 2024.