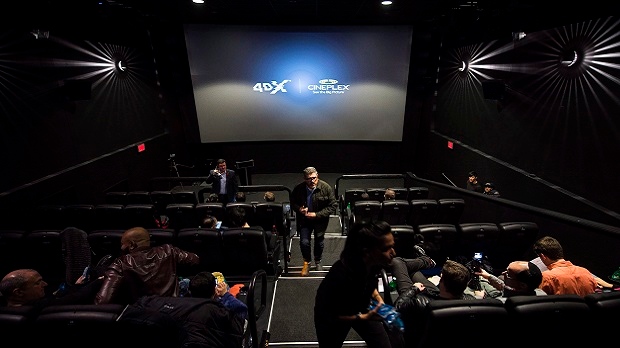 People mill about inside a Cineplex theatre as it opens its first 4DX sensory experience theatre which features 80 motion seats and other enhancements like water effects, snow, wind, lighting and scent in Toronto on Friday, November 4, 2016. The auditorium at Cineplex Cinemas Yonge-Dundas and VIP is the 300th 4DX screen and the first in Canada. (THE CANADIAN PRESS/Nathan Denette)

TORONTO -- Within a few minutes of stepping inside Cineplex's new 4DX auditorium you'll probably know where you stand on the concept.

Having wind, artificial rain and snow flying around at the movies certainly won't appeal to everyone. Especially at a hefty $24.99 per adult ticket for a 3D movie.

Teenagers probably can't afford it and parents might not want to sit through it. But Cineplex hopes to strike gold with the "immersive" technology.

The experience will be familiar to anyone who's spent a day roaming Disney World or Universal Studios. Four-dimensional gimmicks were the cornerstone of Disney's now-defunct theme park ride "Honey, I Shrunk the Audience!" and Universal's "Shrek 4-D," where audiences were tossed around in motion chairs and splashed with water.

Watching 4DX is essentially the same experience but stretched across the length of an entire Hollywood film rather than a 10-minute ride.

That sort of emotional roller coaster could get exhausting after two hours, but most of the effects are saved for the big action scenes.

Cineplex is using Marvel's latest superhero flick "Doctor Strange" to showcase what 4DX has to offer.

Before the film starts, a lengthy warning on the potential dangers of the format appears. Pregnant women shouldn't participate, people with high blood pressure should consult a doctor first, and anyone carrying a hot beverage should think twice -- or at least sip carefully.

Cue chuckles from the audience.

As "Doctor Strange" begins, the theatre seats come to life, swivelling around as a warmup for what's to follow. Some of the best moments in the 4DX experience come from the motion seats, which aren't much different from Cineplex's existing D-Box chairs. Those are a couple of dollars cheaper for a ticket and are installed at theatres across much of the country.

Once Benedict Cumberbatch appears onscreen as the title character, some of the more unique 4DX effects begin to kick in.

Here are a number of moments where 4DX either shines or falters in "Doctor Strange":

Pulses from inside the motion seats emphasize percussion in the film's opening score. The same trick returns a few minutes later while Strange is blaring Pink Floyd's "Interstellar Overdrive" as he gussies himself up at his fancy apartment.

When Strange's sports car veers off the road during a rain storm, the 4DX effects are at their best. The motion seats jerk around to replicate the action onscreen while water lightly splashes the audience when the car plunges into a ravine. The motion effects might be a little too realistic for some, but it's a truly shocking moment of trauma.

Nearly every pivotal scene in the superhero film is loaded with punches and kicks. All of them ripple into the audience through the motion seats, which jolt with each impact. Tiny "air shots" fire out of the seat's headrest to represent missed impacts. At first it's exhilarating, but by the umpteenth time Strange has been tossed around, you might feel a bit of whiplash.

A sprinkling of snow begins to flutter down in front of the screen after Tilda Swinton's The Ancient One character jettisons Strange to a mountaintop. Overhead ceiling fans also jump into high gear to create a wind effect, but it practically drowns out the scene's dialogue. It's a lot of noise for little impact.

Puffs of light smoke drift up from both lower corners of the screen to accompany a scene on a Hong King street. But the fogginess disperses almost as quickly as it forms.

Other 4DX effects were absent from "Doctor Strange" but turn up in other films.

Artificial flower scents appear in "Miss Peregrine's Home for Peculiar Children" when the characters stroll through a garden, while bubbles might complement underwater sequences or family films.

While 4DX creators say the effects pull audiences into the movie, they can have quite the opposite impact.

Any time scents or air sprays are activated the tiny nozzles installed in the seats let off an obnoxious hiss that sounds like someone is slowly opening a pop bottle.

When it comes down to it, 4DX is simply another gimmick. It doesn't have the wow-factor of Imax or the relative affordability of 3D.