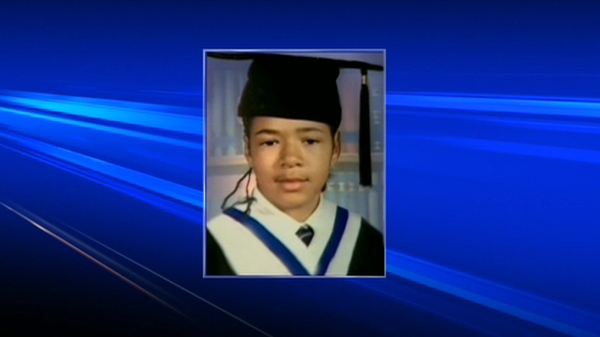 Jordan Manners was killed inside C.W. Jefferys Collegiate Institute on May 23, 2007.

Jordan Manners lay dying at his school while a friend who allegedly pulled the trigger watched and tried desperately to call the 15-year-old's family, a Toronto court heard.

The tragic scene was sketched out in testimony Thursday by gym teacher Genadi Meilikhan, who spoke about the events which led to Manners' death on May 23, 2007.

Meilikhan, a veteran teacher at C. W. Jefferys Collegiate Institute, testified that two other school officials attempted to revive Manners after a bullet pierced a lung and his heart.

"He was gasping for air, out of air, breathing very, very heavily and at that point, we didn't know what happened," said Meilikhan.

However, there wasn't any blood immediately visible because the teen had been injured internally, said the teacher. It wasn't until the teen's clothing was taken off that the wound become apparent.

Prosecutors allege that two men -- now aged 20 -- are responsible for killing Manners. They can only be identified as J.W. and C.D. because they were 17 at the time of the death.

"J.W. was in a very stressful condition. He was constantly trying to call Jordan's family on his cellphone," the teacher testified.

The Crown says the shooting was motivated by theft, and they allege that J.W. is the one who pulled the trigger. Prosecutors will also try to prove during the trial that C.D. rifled through Manners' pockets after the shooting.

Both men have pleaded not guilty to first-degree murder. The allegations against haven't been proven in court.

In a chilling turn during testimony, the teacher said that the accused gunman was seen joking around with Manners only moments before the shooting.

Meanwhile, Manners' mother Loreen Small was left visibly upset by the testimony. At one point, she left the courtroom because the evidence was too painful to hear.

"It's pain, pain and suffering. It's like burying my son again," Small said outside of the courtroom.

CTV Toronto's Janice Golding said that Small's hands were trembling and her eyes were focused on the ground while the evidence was being presented.

The trial is ongoing.

With a report from CTV Toronto's Janice Golding