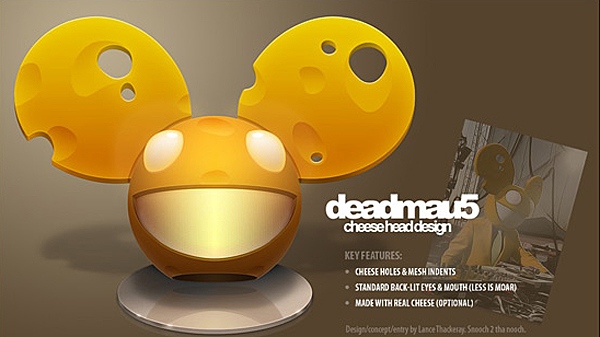 A screen capture from the Talenthouse blog of the winning helmet in Deadmau5's design competition.

A graphic designer from England has created the winning entry in a contest to create a new "mousehead" for the Grammy-nominated Niagara Falls, Ont., house producer Joel Zimmerman, otherwise known as Deadmau5.

Lance Thackeray says he used Photoshop to create the cheese-influenced helmet, which comes complete with holes in the ears.

The design also features mesh indents and back-lit eyes and mouth, as well as the optional provision that the helmet is to be made with real cheese.

For his prize, Thackeray's design will be produced and donned by Zimmerman for promotional events and live shows.

Thackeray will also receive two VIP passes to a Deadmau5 performance in L.A.

The artist celebrated the news on Twitter, and made sure to offer his gratitude to Zimmerman.

"Thank you so much man, really," he wrote. "I truly hope it'll be comfy to wear!"

Zimmerman will be touring into the fall, including dates in Vancouver, Montreal and Toronto's cavernous Rogers Centre.