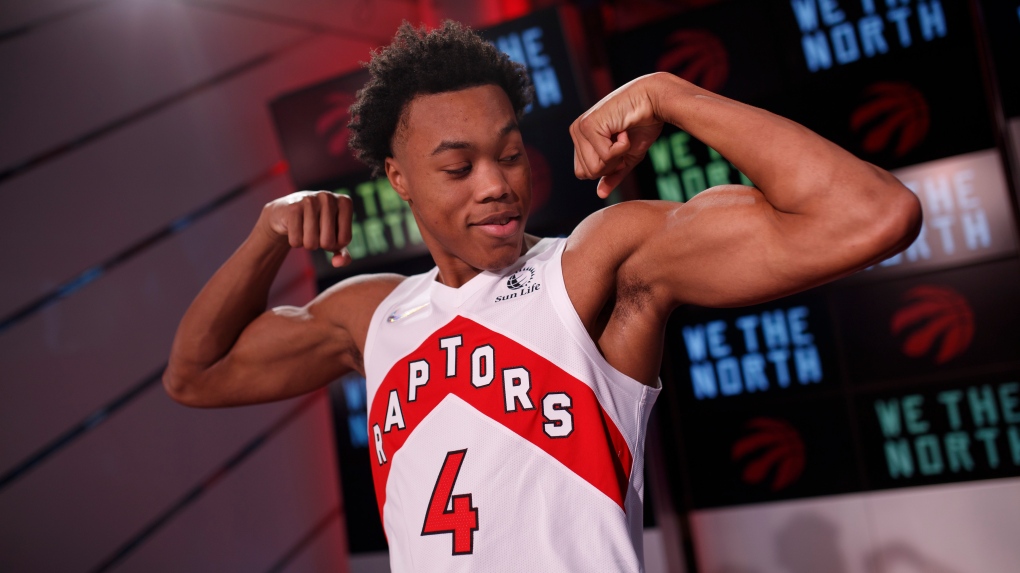 TORONTO -- Scottie Barnes has yet to play a real NBA game, but the gregarious rookie is quickly becoming one of the most popular Raptors.

He's a cheering, clapping human energy drink, and his new teammates grinned during Monday's media day as they recounted tales of his time so far in Toronto.

If it's rare for a 20-year-old rookie to instantly step into a vocal role on a new team, Barnes shrugged and said he didn't think twice.

“At this level, you can't be shy. You can't be trying to look too cool,” Barnes said after his first training camp practice Tuesday at OVO Athletic Centre. “It's just the dirty things that you need to do on the floor, that's what's going to need to be happening. It's not really that hard. I'm not a shy guy. I'm just going to be who I am no matter where I'm at.”

The Raptors selected the Florida State forward, known for his stifling defence, with the No. 4 pick in the NBA draft. Twice before the Raptors chose fourth - Chris Bosh in 2003, and Antawn Jamison in 1998, who they traded for Vince Carter.

Expectations for the young player will be lofty this season, but so far he's earned nothing but praise, including from head coach Nick Nurse who said Barnes will play a “huge role” this season.

“I would imagine he's going to get as many reps as possible, and that's start next Monday night (when Toronto hosts Philadelphia in the pre-season opener),” Nurse said

At six foot nine, and boasting a seven-foot-two wingspan and huge Kawhi Leonard-sized hands, Barnes has long been touted for his versatility. He has the ability to play all five positions, and with his speed and ballhandling, he's been compared to a point guard in a forward's body.

If he left one box unchecked, it was his shooting. He shot just 27.5 per cent from three-point range in college, and his robotic shooting style has drawn some criticism.

No surprise, he spent a good chunk of his time in the off-season working on his shot.

What tweaks has he made?

“Just the release on my shot on my fingers. Shooting off of two of my fingers, and just pushing to my side a little bit. It has been (feeling more natural). We've been working a lot the last two months. I feel like I'm getting better at it every single day.”

Barnes, who got a taste of the NBA during the summer league, said the biggest adjustment from college is the speed of the game.

“It's constant running, the floor is longer, bigger so you have to be in really good condition,” he said. “The guys are bigger, stronger and you can really feel it at this level. So that's really about it, just staying in condition, getting your wind right, being able to run up and down the floor where it's going to take a high level of conditioning.”

Sounds like hard work won't be a problem for Barnes.

“Works hard, you're going to see him to be first in the gym, last to go out,” said Goran Dragic, the 13-year NBA veteran who arrived in Toronto as part of the sign-and-trade deal with Miami for Kyle Lowry. “He's got that personality that it's unique, and I really like him. He's got a bright future. I can already see that. It's funny, he's really funny.”

“He's just an exciting kid, he's exciting to be around, and he just has a great presence and it's really, really fun to see,” Siakam said. “I feel like he might beat me in terms of energy just because he's always happy, always excited.”

It's partly his humour and all-around good-natured demeanour - evident in his social media presence - that has endeared him to Toronto fans.

On the heels of the draft, he penned a letter on The Players' Tribune titled “What's Good, Toronto?” in which he talked about his excitement around playing for Toronto, and the love he'd already experienced from Raptors fans.

Fans followed him on Instagram Live while he walked about Toronto exploring his new city, and he earned raucous applause when he threw out the first pitch at a Toronto Blue Jays game - further cranking up the hype around the young player.

Fans will get a first glimpse of his on-court enthusiasm Monday against Philadelphia.

“I think he wants to be part of the team, it's kind of like 'Let's do this all together,”' Nurse said. “I think he's vocal and demonstrative in that, and who doesn't love that?”

This report by The Canadian Press was first published Sept. 28. 2021.