TORONTO -- Multiple charges have been laid after a police helicopter was struck by a bright laser pointer three days in a row while it was flying over residential areas in York Region.

The first incident occurred around 11:25 p.m. on May 21 as the Air2 helicopter was on general patrol above the area of Rutherford Road and Islington Avenue in Vaughan.

The pilot and tactical officer were struck by a “bright light source,” police said in a news release issued on Wednesday morning.

In video of the incident released by investigators, a green light can be seen flashing from a home. Someone on the helicopter can be heard radioing to officers on the ground, who are then seen heading towards a person sitting outside a residence.

An officer can be heard in the video saying that a laser had been recovered. A suspect was taken into custody in connection with the incident.

A 44-year-old man from Vaughan has since been charged with mischief endangering life, endangering the security of an aircraft in flight under the aviation act and unlawfully projecting a bright light into navigable airspace under the Canadian Aviation Regulation.

The following evening, as the helicopter was over the area of Birchmount Road and Enterprise Boulevard in Markham, it was struck multiple times by a laser pointer.

Video footage taken from the Air2 helicopter shows a green light striking the aircraft numerous times from what appears to be a high-rise building. 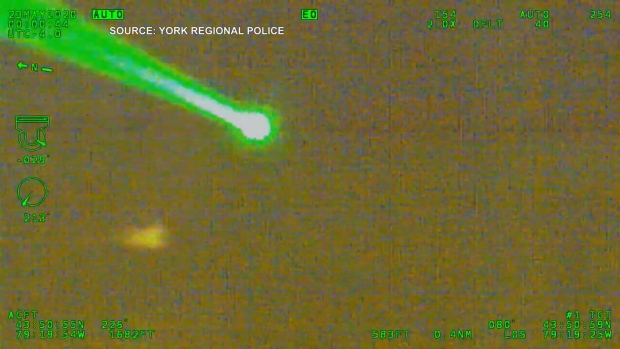 Police said that a suspect, who was believed to be on a hotel balcony, was taken into custody.

A 52-year-old man from Markham has been charged with mischief endangering life, obstructing police, endangering the security of an aircraft in flight under the aviation act and unlawfully projecting a bright light into navigable airspace under the Canadian Aviation Regulation.

On May 23 around 11:30 p.m., the helicopter was hit yet again by a laser while on general patrol near Bathurst Street and Jefferson Sideroad in Richmond Hill. Police say the investigation is ongoing and a suspect has not yet been identified.

Charges have been laid in two incidents of laser strikes on Air2 and a third incident is under investigation. Pointing a laser at an aircraft is extremely dangerous and it is a serious offence. Anyone engaging in this behaviour can expect to face charges. https://t.co/h6OuYfOq0O pic.twitter.com/sqjom0ksMz

In the release, York Regional Police said that laser pointers can cause harm not only to the people onboard the aircrafts but also the general public.

“Health Canada warns that a split-second look into a laser pointer can result in a condition called flash blindness,” they said. “This is similar to the effect you get during flash photography, where the image of the flash remains in your eyes for a few seconds, then fades away. However, for a pilot in control of an aircraft flying over populated areas, the consequences can be very serious.”

“Those who aim these pointers at aircraft are putting lives in danger, not only in the aircraft but on the ground, as there is a significant potential for harm to the pilot as well as the prospect of a crash.”

Anyone with information about the third incident is being asked to contact York Regional Police or reach out to Crime Stoppers anonymously.