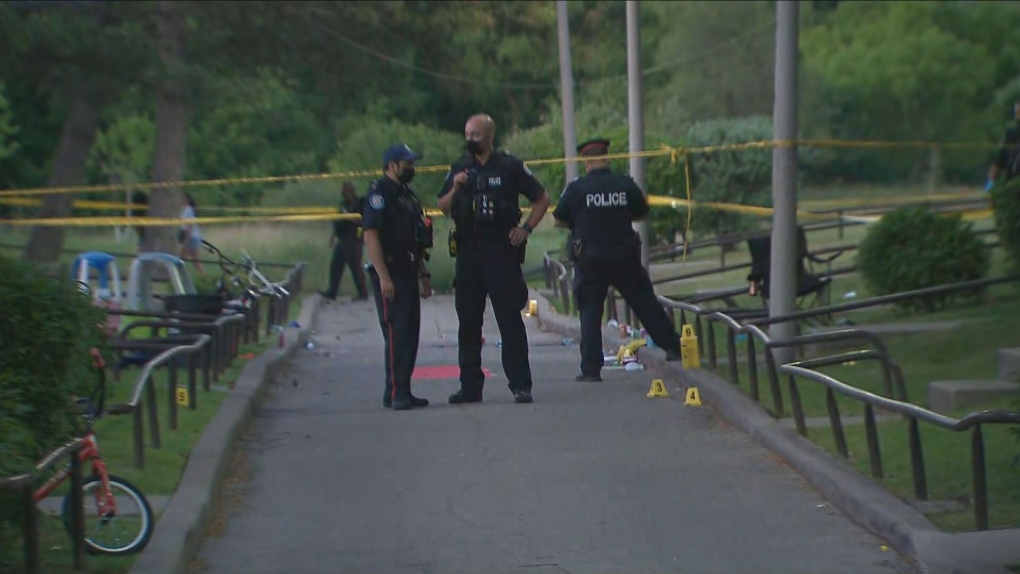 Toronto police are investigating a shooting at a child's birthday party in Rexdale that left at least four people injured, including three children.

TORONTO -- Toronto police have laid charges in connection with a shooting that injured four people — including three children — at a toddler's birthday party in Rexdale over the weekend.

Officers were called to the area of Tandridge Crescent and Byng Avenue shortly before 8 p.m. on June 19.

Police said Monday that they have now laid charges against the man who was shot.

Demar Cadogan of Toronto has been charged with discharge firearm with intent, possess restricted or prohibited firearm without holding a licence and registration certificate, possess loaded regulated firearm, and possess firearm while prohibited.

Police have said they are searching for multiple suspects in connection with the case and the investigation remains ongoing.

Investigators also said Monday that the five year-old girl remains in critical condition in hospital. The two boys have been treated and released from hospital.

Speaking with CP24 Saturday, police called the shooting “horrific” and said shots appear to have been fired into the crowd indiscriminately.

The suspects then ran away southbound to a waiting vehicle.

Police have not described a motive for the shooting, but it is not believed that any of the children were specifically targeted.

Investigators are appealing to anyone with further information to come forward to police by calling 416-808-2300, or by calling Crime Stoppers anonymously at 416-222-TIPS (8477).