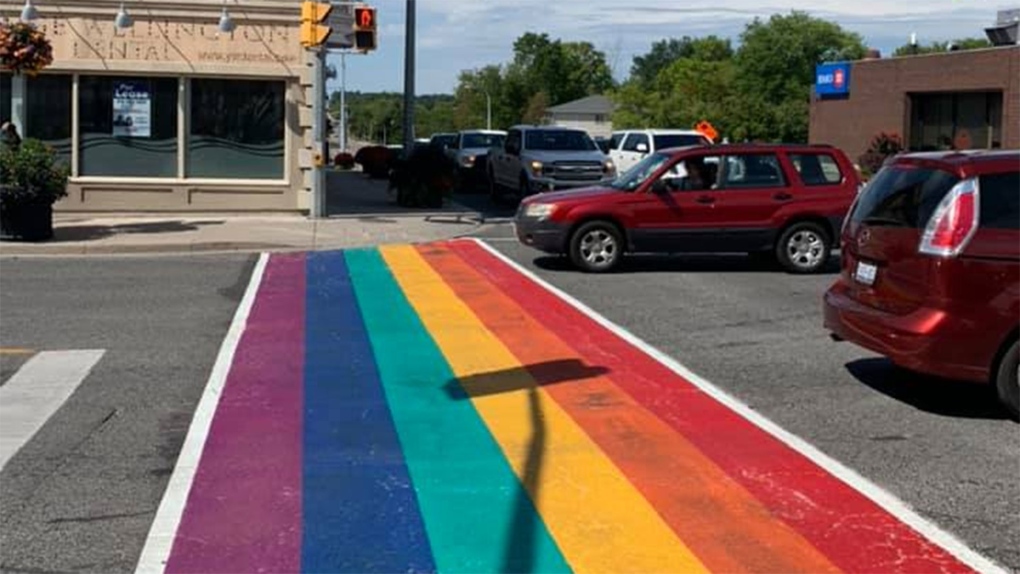 A permanent rainbow crosswalk is seen at Yonge Street and Wellington Road in Aurora after being unveiled Thursday August 20, 2020. (Pflag York Region /Facebook)

TORONTO -- York Regional Police say a 57-year-old man has been charged after a rainbow crosswalk in Aurora, Ont. was vandalized for the second time in 24 hours.

Police say officers on patrol in the area of Yonge Street and Wellington Road spotted a man using black spray paint to damage the town's rainbow crosswalk around 3 a.m. on Saturday. The crosswalk was unveiled on Thursday in support of the LGBTQ+ community.

A suspect, identified by investigators as 57-year-old Roy Zinn, was arrested at the scene and subsequently charged with mischief.

The incident comes just one day after police say a pickup truck drove over the crosswalk on two separate occasions, leaving black skid marks on it.

"Investigators believe that the marks were done intentionally," police said in a news release issued Saturday.

The driver of the pickup truck has not yet been identified but investigators have released photos of a suspect vehicle.

Police have said both incidents are being investigated as hate-motivated vandalism.

Anyone with information about the case can contact police or Crime Stoppers anonymously.