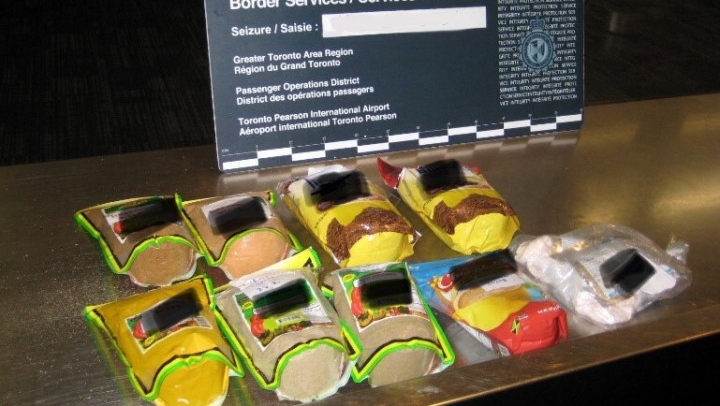 TORONTO -- Two people have been charged after about $1.27-million worth of suspected cocaine was seized at Toronto Pearson International Airport last month.

According to the Royal Canadian Mounted Police (RCMP), the drugs were seized from individuals returning to Canada on commercial airline flights.

The first incident occurred on June 18 as a woman arriving on a flight from Jamaica was referred for a secondary exam by a border official.

“The officers examined six food packages, which revealed 6.6 kilograms of suspected cocaine within the items,” the RCMP said in a news release issued on Monday.

The Canada Border Services Agency (CBSA) estimates the drugs are worth about $825,000.

The second incident occurred less than a week later on June 23 after another woman was referred to a secondary exam after arriving in Toronto from Jamaica.

Border officers inspected the woman’s belongings and allegedly found 3.85 kilograms of suspected cocaine hidden in eight food packages. The estimated value of the drugs is about $447,500.

The RCMP said that both individuals were taken into custody and the drugs were seized.

Etobicoke resident Mavis Coreta Segree, 76, and Hamilton resident Amran Jama, 31, have each been charged with importing a substance included in Schedule 1 (cocaine) contrary to the Controlled Drugs and Substances Act.

They were both released on bail with conditions and are expected to appear in court in Brampton, Ont. on Aug. 26 and Sept. 2 respectively.

According to the RCMP, more than 184 kilograms of suspected cocaine has been seized in the Greater Toronto Area this year.