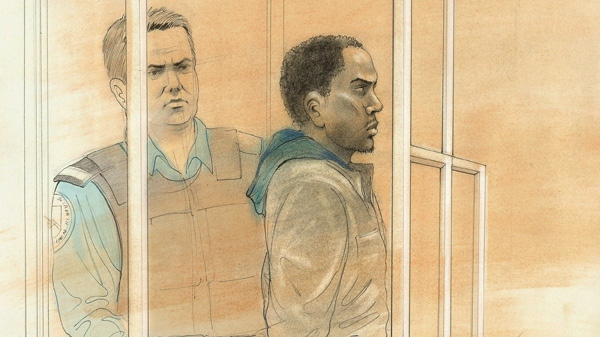 Christopher Husbands, the suspect in the Eaton Centre shooting is shown in a court sketch on Monday, June 4, 2012.

He appeared wearing a blue hooded sweatshirt, grey windbreaker and jeans and spoke softly, keeping his face hidden from the court.

Husbands was previously charged with one count of first-degree murder and six counts of attempted murder.

Nirmalendran was one of seven people injured in the attack, which took place in the mall food court shortly after 6 p.m.

Ahmed Hassan, 24, was also killed in the shooting. Police believe Hassan was the target of the attack.

Police are asking anyone with images or video from the shooting to give them to police to aid in their investigation.

Husbands will remain in custody until August 15 where he will appear again through a video link.