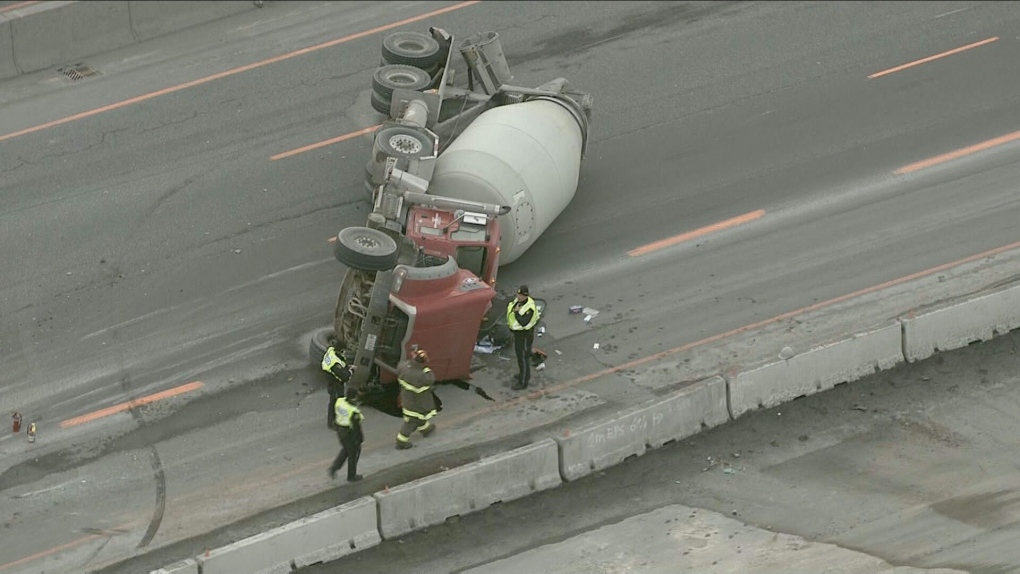 TORONTO -- The northbound lanes of a busy GTA highway were shut down for hours following a cement truck rollover Monday evening.

The collision happened in the northbound lanes of Highway 400 near Lloydtown-Aurora Road at around 5 p.m.

Images from the scene showed the cement truck flipped over on its side.

“The driver of this cement truck was exiting (Lloydtown-Aurora) Road and trying to ramp onto Highway 400 northbound, when he lost control,” Ontario Provincial Police Sgt. Kerry Schmidt said in a social media post.

The driver was uninjured, but the northbound lanes of the highway were shut down for several hours.

At around 6:30 p.m., OPP said one lane of the highway would reopen briefly. However police also said that the northbound lanes would be fully shut down again at 7:30 p.m. so that the truck could be righted.

“We are concerned that the tank could come apart from the truck,” Schmidt said. “It is loaded with about five yards (about 3,823 litres) of cement inside the tank, and we will have all lanes shut while we try to lift that spin truck back up onto its wheels.”

Shortly after 9 p.m., OPP said all lanes of the highway had reopened.

Police said the cement mixer was carrying about half a load when it flipped over.

There is no word on possible charges, Schmidt said.