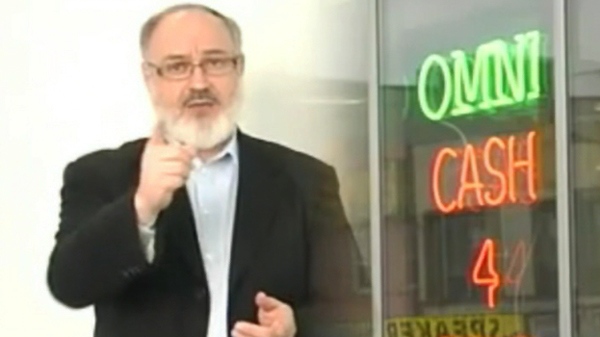 Jack Berkovits, owner of Omni Jewelcrafters, alleges a competing cash-for-gold business hired to a hitman to kill him. (CTV)

TORONTO - Allegations an elderly woman who works for a cash-for-gold business ordered a hit on a rival jeweller are "far-fetched," her lawyer said Friday.

The target of the alleged murder-for-hire plot was Jack Berkovits, who owns Omni Jewelcrafters. He has said that as the cash-for-gold market heats up, so has competition between his store and the Jewellery Buyer, across the street.

Still, Berkovits says he was surprised when a man told him he had been hired by someone at the Jewellery Buyer to kill him.

Police allege that person was Maria Konstan, 72, who faces two counts each of threatening death or bodily harm and counselling to commit an indictable offence, as well as one count of threatening to damage property.

Her case was briefly in court Friday, but Konstan was not required to appear in person and her lawyer said she is vacationing in Europe.

But Aaron Spektor said his client has never been in trouble with the law before and that she disputes these allegations.

"We're talking about a nice looking woman in her 70s, well-groomed. She's articulate," he said outside court.

"(The charges) are extremely far fetched. I think she was shocked initially. She emphatically denies them, but she's left it up to me to try and resolve them."

Employees at Omni Jewelcrafters tell a different tale about Konstan, and allege she would stand outside their business wearing sandwich board advertisements, in an attempt to steal potential customers.

Someone who answered the phone at The Jewellery Buyer said owner Harold Gerstel was not taking media calls.

Quentin Janes, an employee at Omni Jewelcrafters said Konstan has a starring role in ads for Gerstel's business. He said Torontonians know Konstan as the elderly woman who trades in her gold for a wad of $100 bills and waves them in front of the camera saying incredulously, "It was so easy -- now I'm ready to shop."

The case will be in court next on Sept. 10, though Konstan's lawyer says he doesn't expect she will have to appear then either.