TORONTO -- Some families living on a west-end residential street are frustrated about vehicles driving onto the sidewalk as way to get around traffic congestion and are concerned about pedestrian safety.

The problem is being caused by construction to replace TTC tracks on Dundas Street West, which is sending traffic down side streets.

“I’ve seen dozens of cars, everyday on the sidewalk,” said Amy Norris who lives on Macdonell Ave. and likes to take her baby on walks. 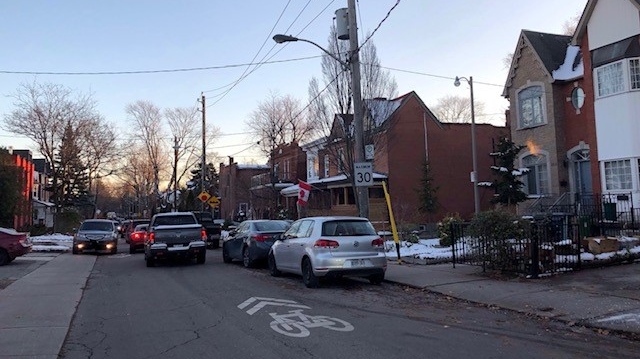 “There’s a huge amount of young families, young kids on the sidewalks and I’m worried for their safety.”

Staff are committed to ensuring the work zone is safe for all those who live nearby and travel through the area, said Eric Holmes, Senior Communications Coordinator for Transportation Services.

“The city’s work zone coordination team have been actively addressing concerns with the local councillor’s office and the local community, as well as other project stakeholders to find solutions and mitigate traffic congestion - created by the construction - as much as possible,” he said

But Brad Spacinsky, a father of three and six year olds, said he believes the city hasn’t been doing enough.

He decided to make some barriers of his own, using a bucket and wood painted yellow, and put them on the sidewalk. He said the barriers worked until they had to come down.

“The city came and simply said they weren’t allowed to be on there. They cited some city bylaw that you couldn’t put anything on the sidewalk,” said Spacinsky, who added the problem has been going on at least since Halloween. 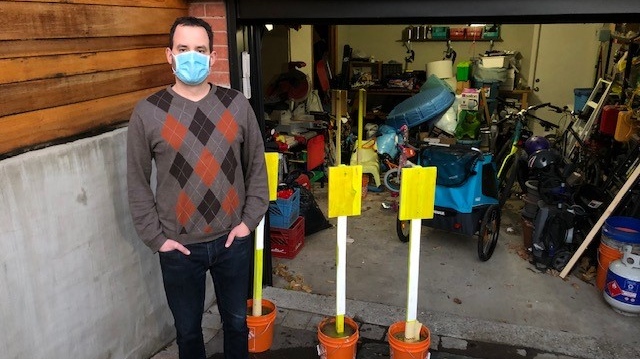 Norris said she wants a detour put in place and the barriers were a great initiative.

“They kept cars off the sidewalk and that’s really all I want,” she said.

Parkdale-High Park City Councillor Gord Perks said efforts have made to re-direct traffic in the area.

“The west end, as you come in from Etobicoke and Mississauga, everything narrows down to three or four points because of that train track and when we have to do road work from time to time, we get these very difficult situations.”

Holmes said additional signage has been posted in the area to use a different route, traffic signal timing adjustments have been made and additional police officers are expected to be assigned to the work zone area.

The city is also looking at deploying traffic agents and restricting parking on Macdonell Avenue to allow for more space for two-way traffic.

The city said the construction is expected to finish ‪before December 18.‬

“The City continues to advise drivers to avoid the area if possible and to plan travel ahead. Motorists are also reminded to obey traffic rules and to not make dangerous or illega."