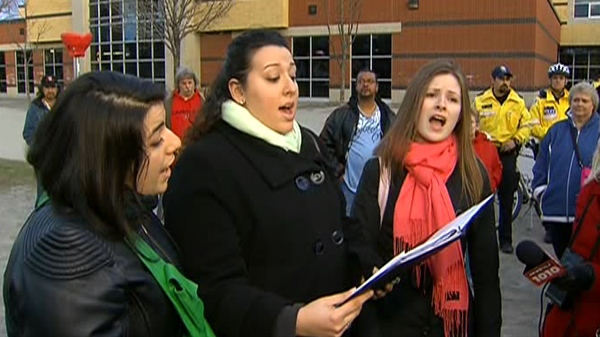 Parkdale community residents take part in a memorial in honour of the recent victims of violent assault, Wednesday evening, April 13, 2011.

Parkdale community residents are holding a candlelight vigil on Wednesday evening in honour of the recent victims of violent assault in the area.

A recent attack resulted in the death of mentally-handicapped George Wass, 62.

Wass died after being beaten near the intersection of Queen Street West and Jameson Avenue on March 18.

He collapsed and died three days later. A coroner ruled the cause of death was blunt force trauma to the chest.

Daniel Chiarelli, 45, was also assaulted when he walked in the Maynard Avenue and Leopold Street area early in the morning on April 5.

"I saw him out of the corner of my eye and thought it was kind of suspicious and quickened my step, but I'm a little older and he obviously can run a lot faster than me. There was no chance I could get away," Chiarelli told CTV Toronto on April 5.

The beating only stopped when a nearby resident helped scare the suspect off.

"Whoever that person was I thank them because it could have been a lot worse," he said.

Authorities say that the recent assault share similarities. The suspect has targeted victims with their back turned and covers his face with a piece of clothing or balaclava.

"They are basically rushed, punched in the face. The victim falls to the ground and there's an onslaught of punches and kicks while the victims are down," said Toronto Police Const. Tony Vella.

The candlelight vigil will be held on Wednesday, April 13 from 7:30 p.m. to 8:30 p.m. at the Parkdale Community Recreation Centre.

Toronto police officers from Division's 11 and 14 will be in attendance.