TORONTO -- Staff at Humber River Hospital had just a few hours to pull together a spontaneous wedding after a cancer patient decided to pop the question to his girlfriend of 17 years.

Errol Meikle and Angela Anderson were both born in Jamaica, but they didn’t meet until they came to Canada. They exchanged phone numbers after their first meeting.

“I had his number but I didn’t call him right away and he didn't call me right away. Eventually I called him and he said to me, ‘I thought you were never gonna call,’” Anderson said

They’ve been together ever since.

In the early years, it was Meikle who was nursing Anderson through her epilepsy.

“I started have seizures and having them pretty bad” she told CTV News Toronto. “So when I passed out, I wouldn’t know what was going on. I would always wind up in the hospital and he really stood by me.”

But more recently, it was Meikle who had the health troubles. He was initially diagnosed with lung cancer, which spread.

The couple were planning to get married this Spring and had tentatively targeted April for the wedding. But when the COVID-19 pandemic struck, their plans were put on hold.

Then at 5:30 p.m. on May 5, the couple told staff at Humber River hospital they wanted to tie the knot right away. Staff scrambled to make it happen.

“Errol and Angela’s love for each other surpasses the trials and agony of cancer and seizures,” Blaksley said in the ceremony.

While the ceremony was simple, the hospital’s CEO made sure the newlyweds were able to have some champagne and cake to celebrate. 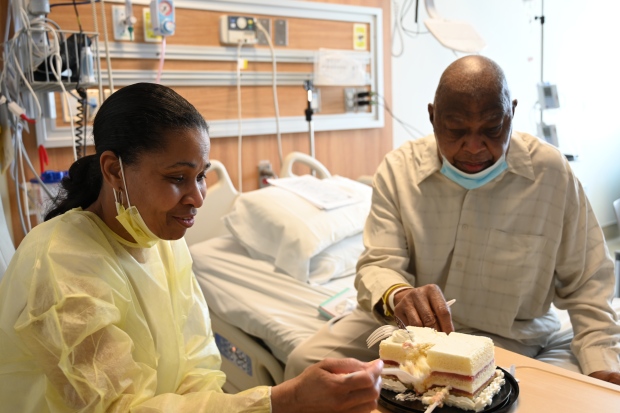 “’I’m comfortable with her just the way she is” Meikle said of his wife. “And I think she’s the same with me.”

Because of physical distancing they couldn’t have family join them for the ceremony but they had about 15 staff from Humber River Hospital take part in the happy occasion, a moment of celebration amid the uncertainty of COVID-19 and cancer.