TORONTO -- An Ontario cancer patient is calling on the provincial government to devote at least one hospital in Ontario to carrying out life-changing surgeries.

Mary Swark-Hougaard of Ajax said she was diagnosed with an invasive type of breast cancer about one month ago.

The 59-year-old said the day before she was supposed to meet with her surgeon, she was told by her doctor that although the surgery she needs is “life-saving,” the procedure is on hold because of the COVID-19 crisis.

“I was absolutely devastated. Are they crazy? This has got to come out of me. It’s going to spread,” Swark-Hougaard told CTV News Toronto in an interview Saturday.

Swark-Hougaard has been isolated for about a month trying to protect herself and thought she would have her lump out by now.

“If they do not get a handle on the cancer surgeries, there are going to be thousands of cancer patients [who] die and we’ll just be a statistic. We won’t be a statistic that we died because of COVID-19, we will be a statistic because the government let us down, big time,” she said.

“Unfortunately, this is something that we need to do unless that person's life is in danger,” she said.

“These are decisions that are being made with respect to each individual patient by the hospitals, by their physicians, and with the assistance that the Cancer Care Ontario Division of Ontario Health. So, this isn't just everybody who has surgery that's coming up is going to be canceled. Not at all.”

In an email Saturday from Ontario Health (Cancer Care Ontario), a spokesperson said it has prepared a guidance document that helps all those involved in cancer care across the province to make decision in the event of pandemic, like COVID-19.

“Hospitals are using this guidance to triage cancer surgeries based on a number of factors including the aggressiveness of the cancer and the stage of the cancer. In doing so, hospitals can ensure they are ready for increased COVID-19 hospitalizations.”

“During this extraordinary time, surgeons are triaging cancer surgeries on a case-by-case basis, based on the severity of the patient’s cancer, and not by cancer type.”

Swark-Hougaard said she’s willing to travel across the province to have her surgery, including a rural hospital.

A musical message to decision makers

Swarm-Hougaard plays the guitar and has been writing a song to Prime Minister Justin Trudeau that she hopes will raise awareness about the need for cancer surgeries to go ahead.

“Well I’d like to talk to you about the surgery line. I need a lumpectomy and I’m running out of time” she sings in a video provided to CTV News Toronto. 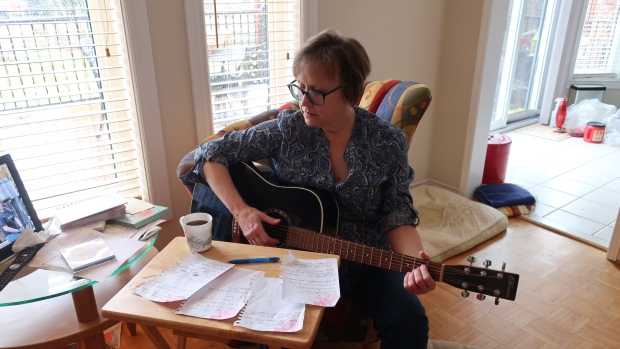 She said after connecting with other cancer patients, many did not realize the decision to postpone elective surgeries could include cancer surgeries.

She‘s vowing to keep using her voice to let decision makers know what she and other cancer patients are going through.

“To ensure that the sickest people are able to get the treatment that they need. What is considered essential should be decided by a doctor on a case by case basis taking into consideration the unique circumstances of each patient,” said association president Dr. Sohail Gandhi in an email to CTV News Toronto Saturday.