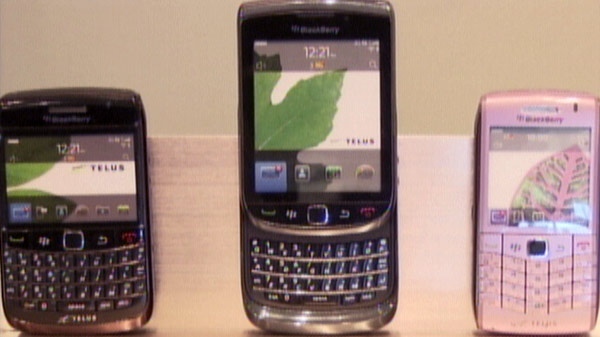 WATERLOO, Ontario — U.S. President Barack Obama couldn't bear to part with his BlackBerry. Oprah Winfrey declared it one of her "favourite things." It could be so addictive that it was nicknamed "the CrackBerry."

Then came a new generation of competing smartphones, and suddenly the BlackBerry, that game-changing breakthrough in personal connectedness, looks ancient.

There is even talk that the fate of Research In Motion, the company that fathered the BlackBerry in 1999, is no longer certain as its flagship property rapidly loses market share to flashier phones like Apple's iPhone and Google's Android-driven models.

With more than $2 billion in cash, bankruptcy for RIM seems highly unlikely in the near term, but these are troubling times for Waterloo, Ont., the town of 100,000 that was transformed by the BlackBerry into Canada's Silicon Valley. RIM is Canada's most valuable technology company, an international icon so prestigious that founder Mike Lazaridis and its other driving force, Jim Balsillie, are on an official government list of national heroes, alongside the likes of Alexander Graham Bell.

RIM's U.S. share of the smartphone market belly-flopped from 44 percent in 2009 to 10 percent in 2011 according to market researcher NPD Group. The company still has 78 million active subscribers across the globe, but last month RIM issued a warning that it will lose money for the second consecutive quarter, will lay off workers this year, and has hired a team of bankers to help it weigh its options. Last July it slashed 2,000 jobs.

Of RIM's 16,500 remaining employees, 7,500 live in Waterloo, a university town 90 minutes' drive from Toronto, where everyone seems to know someone who works for RIM.

The decline of the BlackBerry has come shockingly fast. Just five years ago, when the first iPhone came out, few thought it could threaten the BlackBerry. Now Chief Executive Thorsten Heins says his employees "are getting asked all the time, 'What's going on with you guys? What happened? I mean RIM is the star of Canada and what happened to you guys? And how bad is it going to go?'"

RIM's software is still focused on email, and is less user-friendly and agile than iPhone or Android. Its attempt at touch screens was a flop, and it lacks the apps that power other smartphones. Its tablet, the PlayBook, registered just 500,000 sales to Apple's 11.8 million in the last quarter despite a price cut from $500 to $200, well below cost.

RIM's hopes now hang on BlackBerry 10, a new operating system set to debut later this year. It's thoroughly redesigned for the new multimedia, Internet browsing and apps experience that customers are now demanding.

Heins, formerly RIM's chief operating officer, says he can turn things around with BlackBerry. He took over in January after the company lost tens of billions in market value and founder Lazaridis stepped down along with co-CEO Balsillie.

RIM was once Canada's most valuable company with a market value of $83 billion in June 2008, but the stock has plummeted since, from over $140 share to around $10. Its decline is evoking memories of Nortel, another Canadian tech giant, which ended up declaring bankruptcy in 2009.

"It has to be very sad," BGC Financial Partners analyst Colin Gillis said from New York. "I feel for those people up there because what else are you going to do - work at the Apple store that just opened in the mall?"

But Waterloo is home to more than 800 tech companies and is certainly no company town, many here insist. Smaller firms like e-learning company Desire2Learn have doubled their head count in the last year, and Google has opened an office here.

Tad Homer-Dixon, chairman of the Center for International Governance and Innovation, a Waterloo-based think tank, likens Waterloo to Rochester, New York, where the blow of Kodak's bankruptcy filing is cushioned by the network of startups the company helped to spawn.

"They've taken an enormous hit because of the collapse of Kodak, and Waterloo will take an enormous hit assuming that RIM ultimately vanishes from the scene, but I think the overall economy and region has been so fundamentally changed by RIM that it will actually do very well," Homer-Dixon said.

Homer-Dixon says RIM's impact on the city has been staggering.

His think tank was created by RIM's Balsillie, and he also is a professor at the Balsillie School of International Affairs at the University of Waterloo. Balsillie and Lazaridis have together donated more than $400 million to the community. Lazaridis has donated $150 million to the Perimeter Institute for Theoretical Physics, which he founded in 2000 and which attracts the involvement of such giants of physics as Stephen Hawking.

"Ten years from now BlackBerrys will be in the Smithsonian but these institutions will hopefully still be thriving," Homer-Dixon said.

Lazaridis, 51, remains on RIM's board. Canadian billionaire Prem Watsa, a fellow board member, calls the Turkish-born Greek immigrant a genius who pioneered the smartphone. "It really would be unfortunate if anything happened to RIM, and I'd like to do whatever I can to help," Watsa said.

In an interview with The Associated Press at RIM headquarters in Waterloo, Heins said he won't try to compete head-to-head with Apple but will try to build on RIM's strengths, such as its dominance of the corporate smartphone market. RIM says more than 90 percent of Fortune 500 companies use BlackBerry and that more than a million North American government workers rely on BlackBerry's software security.

But Heins acknowledges RIM failed to quickly adapt to the emerging "bring your own device" trend, in which employees bring their personal iPhones or Android devices to work instead of relying on BlackBerrys issued by their employers.

That's where BlackBerry 10 comes in - delayed but not too late to vie with the new Apple iPhone expected this fall, or so Heins hopes.

"At the end of the day if the product is good you can always come back," Heins said. "There's many examples of how that has happened. I'm not that scared about this, frankly."

Other tech companies have indeed recovered from the ropes. The late Steve Jobs said Apple was less than three months away from bankruptcy when he rejoined it in 1997, and it's now the world's most valuable company.

Homer-Dixon said it's amazing that RIM in Waterloo got this far, considering it has had to compete with Silicon Valley, "the most powerful engine of innovation that humankind has ever created."

Neither Lazaridis nor Balsillie has given interviews about RIM since stepping down, but Homer-Dixon suggests Balsillie is well prepared for a change of fortune.

He recalls being on a boat in the Arctic in mid-2009 with Balsillie, who talked about the importance of luck in building a tech giant. A crew member asked where RIM would be in five years.

"He said, 'Well the smartphone industry is a rapidly expanding market and I think we'll retain a segment of it.' Then his last words were 'I don't think RIM will go bankrupt, but who knows.'"