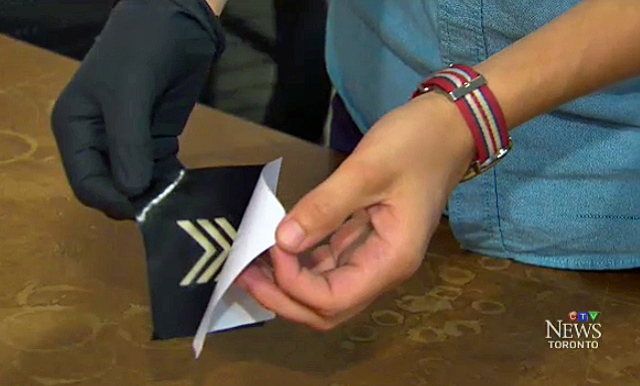 Braden and Tyler Handley are the heads of Inkbox, a Canadian company that sells hundreds of temporary tattoos made using an all-natural formula derived from Genipa americana, a fruit found in the jungles of Panama.

The special mixture, which starts off as a white powder, is applied to the skin using a stencil. The "ink" is invisible at first but after 12 to 24 hours, the tattoo appears on the skin.

"It actually switches the chromophores in your skin to reflect black light so the tattoo actually becomes your skin, your epidermis, the top layer of your skin until your skin naturally regenerates after roughly two weeks," Tyler Handley told CTV Toronto on Wednesday.

The tattoos, which come in black with a hint of dark blue, can also be customized (hyperlink: http://getinkbox.com/pages/custom-tattoos) and take 10 minutes to put on. And unlike traditional skin art, the temporary tattoos are not painful to apply, meaning people can test out designs before taking the plunge and making the design permanent.

Despite the benefits, not all tattoo enthusiasts are excited about the temporary skin art.

"They just think that there’s something really amazing about the permanency of tattoos and we don’t necessarily disagree with that and we can’t replicate the full gamut of tattoo art so we’re OK with people disliking it," Handley said.

The idea, however, seems to be growing in popularity. The brothers launched a crowdfunding campaign earlier this year with the goal of raising $20,000 by Aug. 28. So far, they have raise more than $36,000.

"We soon realized that it’s for everybody, all ages, everyone wants it," Braden Handley said. "Everyone wants a tattoo – they just don’t really know it yet."