Canada has removed only a fraction of thousands of illegal border crossers, data shows 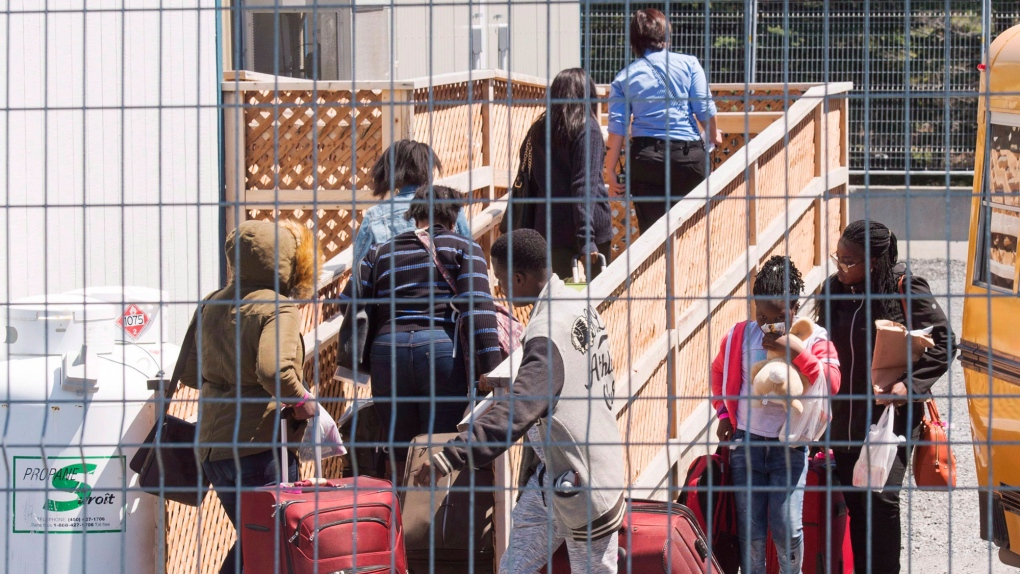 A group of asylum seekers arrive at the temporary housing facilities at the border crossing Wednesday May 9, 2018 in St. Bernard-de-Lacolle, Quebec.THE CANADIAN PRESS/Ryan Remiorz

OTTAWA -- Government data shows thousands of asylum seekers came into Canada illegally across the Canada-U.S. border in the first quarter of the year, but only a fraction were removed from the country during that time.

Between Jan. 1 and March 31 only 135 individuals who made an asylum claim following an irregular entry were removed from the country, says information provided to the Commons committee on immigration.

During that same period, more than 5,000 asylum seekers arrived through unofficial entry points.

The government says border officials can only remove failed refugee claimants after they have exhausted all legal options available to try for refugee status, including applications to the Immigration and Refugee Board, appeals and other administrative measures.

"Everyone ordered removed from Canada is entitled to due process before the law," said Scott Bardsley, press secretary for Public Safety Minister Ralph Goodale.

"Once individuals have exhausted all legal avenues of appeal/due process, they are expected to respect our laws and leave Canada or be removed."

But while the Canada Border Services Agency makes every effort to remove as many ineligible asylum claimants as possible, the vast majority of irregular border crossers are not 'removal ready,' Bardsley added.

This could be because of a lack of travel documents, health concerns or travel restrictions.

Opposition immigration critic Michelle Rempel says she believes government is not doing enough to plan for an orderly immigration system and should be taking further measures to step up claims processing and removals so that irregular migrants do not wait in Canada for years as their asylum claims are processed.

She pointed to statements made by Immigration Minister Ahmed Hussen indicating upwards of 90 per cent of some cohorts of irregular migrants will likely have their asylum claims rejected.

If that's true, at the current rate it could be "decades" before all removals of illegal border crossers are complete, Rempel said

"I think it's a situation of both false hope and costs to the Canadian taxpayer in terms of making sure that people are fed and housed when they're in Canada during this time that is concerning," she said.

"To me it just shows the fact that government is not adequately managing the situation."

The government says it is working to improve things.

In this year's federal budget, the border agency was given $7.46 million to ensure that once rejected refugee claimants have exhausted all legal avenues of appeal, they can be removed promptly.

"Obviously, the requirements of due process need to be adhered to, but there have been some procedural changes that have been implemented," Goodale told the House of Commons immigration committee last week.

"We're also working very hard to get greater international co-operation on the necessary travel documents that need to be obtained in every case of the removal."