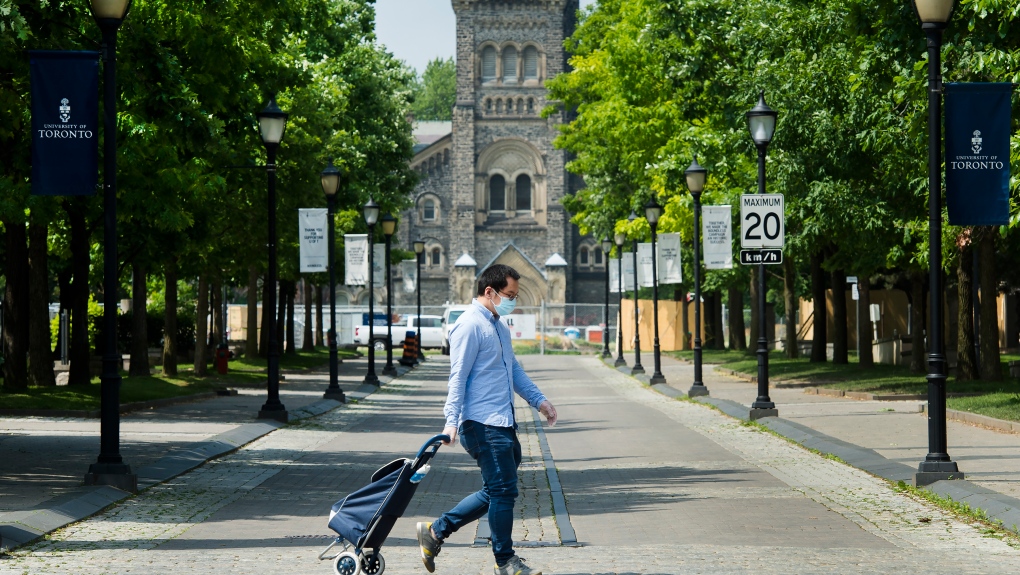 A person walks past the University of Toronto campus during the COVID-19 pandemic in Toronto on Wednesday, June 10, 2020. (Nathan Denette/The Canadian Press)

TORONTO -- A campus coalition at Canada's largest university is urging the school to listen to its own expert research on COVID-19 and roll back its plan to reopen doors to students and staff in the fall.

In an online panel held earlier this week, the University of Toronto Faculty Association discussed what it described as the administration's refusal to address health and safety concerns raised by staff and students despite the school's high-profile health-care advocacy work during the global pandemic.

"It is a complete lost opportunity for the university's senior administration not to consult with their own in-house experts who are also being consulted by the World Health Organization and federal provincial governments," Zoric said.

"They have developed a plan with very little input from the most expert people who work for them. It is beyond disappointing."

"We are following the public health guidelines which are in fact being informed by a wide variety of experts from many universities, including our own," she said. "We are taking our own advice and are really proud that our scientists are a big part of that process."

"What will happen when the weather gets too cold to open windows? Does the ventilation in the room exchange the air or not? You can be in a very large room with poor ventilation and it could be very dangerous as the virus hangs in the air for hours," Zoric said.

Boon said the University of Toronto is following guidelines for ventilation and will determine what activities will transpire in each room to limit the spread on school grounds.

"The ventilation system is designed to have far more people in the room than what we are putting in and they will be wearing masks while being physically distanced," she said.

A petition launched last month by CUPE 3902, a union representing some of the university's faculty members, previously called on the school to re-think its plans for on-campus classes.

Academic workers, library staff, graduate assistants and administrative employees were among the more than 6,600 people who had signed the petition as of Wednesday morning.

CUPE 3902 Chair Amy Conwell said her organization wants to see the return to school done right and in good faith.

"We want to see resumed academic activity in the fall that considers the safety of everyone," she said.

Conwell said her union believes the reason the school is insisting on in-person learning is because it will be hard to justify full tuition fees while delivering classes primarily online.

"We have raised so many safety concerns with them its hard to understand that this is anything other than profit over people."

Boon contends this is not the case.

"There are reasons to bring people to campus," Boon said. "There are some things that can only be taught in-person and we also have students that don't have access to reliable Internet or a suitable place to study. We are very conscious of the inequity that can be created if we only have online classes."

This report by The Canadian Press was first published Aug. 26, 2020.