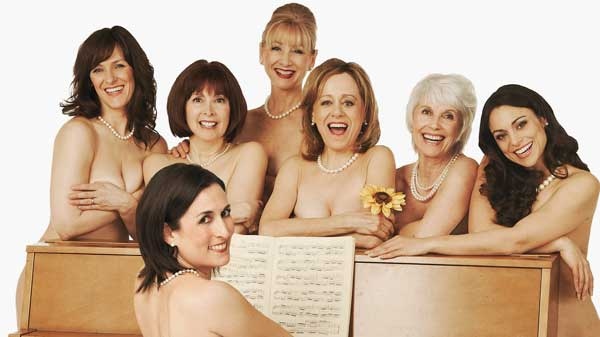 The original Canadian cast of the "Calendar Girls" play that is running at the Royal Alexandra Theatre through May 28 is shown in a handout photo. ( HO- Grajewski Fotograph Inc. / THE CANADIAN PRESS)

TORONTO - Twelve years after they first doffed their duds for charity in England, the original Calendar Girls are still wearing well.

To date, they've raised over three million pounds (nearly C$4.7 million) and counting for lymphoma and leukemia research. They've released a series of semi-nude calendars and inspired a hit 2003 film. And now they're the focus of a stage show that hits Toronto's Royal Alexandra Theatre this week, after a stint in Winnipeg.

Angela Baker, whose late husband's battle with cancer inspired their journey, says she thinks there are several reasons why their story has struck a chord with audiences.

"I think it was because we were all friends, we were older women and we had taken our clothes off," she said during a recent interview with three of her fellow Calendar Girls at the Mirvish Productions office.

"Also, we were members of the Women's Institute, which is thought to be a very fuddy duddy organization where people wore tweed skirts and twin sets and pearls and hats. We took all the clothes off and just kept the pearls on. I think that was a big thing about it. And also because we had done it for a charity."

Their story started in '98 in North Yorkshire, U.K., when Baker's late husband, John, was diagnosed with non-Hodgkin lymphoma at age 53.

To raise funds and awareness of the disease, she and five other members of the local chapter of a social organization called the Women's Institute decided to pose nude for a calendar while covering up with knitting needles, a teapot, easel, pastries and various household items.

"We thought it would be fun for John to come along and watch us have our photographs taken," said Baker, a.k.a. Miss February.

"But he was only ill for five months, he only had five good days, really, at home, so we never did it."

After he died, the WI ladies suggested the calendar idea to Baker again in the hopes it would keep her busy. She agreed and they set up a top-secret, late-night shoot in one of their homes.

"I was supposed to take the photographs. My husband, Terry, was going to set the shots up, and I would go into the girls' (room) and click the shutter," said Lynda Logan, a.k.a. Miss July, who once lived in Vancouver.

"But all the time I was doing that, Terry was looking through a crack and telling me what to tell the model to do, and so in the end we just said: 'Come on in here, Terry,' and he did. From then on he's taken all my friends' photographs in the nude."

Released in April 1999 for the year 2000, the first calendar was a hit and saw the ladies receiving a flood of kudos from fans around the world.

They've since done a new calendar every year and created their own merchandise, donating all the money from sales to leukemia and lymphoma research. A portion of money from ticket sales to the stage show also goes to the cause.

"We didn't realize this when we did it, but I think they thought: 'Well, there's still life in us yet, you know. We're not pensioned off."'

When the "Calendar Girls" film was in production, Baker often had cast and crew members over to her place for afternoon tea.

When Helen Mirren (who was nominated for a Golden Globe for playing Christine Clancy, Miss September) visited, she was armed with sunflowers in honour of John Baker, who had grown them when he was first diagnosed.

"She'd been 'round the shops in Skipton to buy sunflowers to bring us and she just stood there and she just said: 'I'm so excited about meeting you girls,"' said Baker.

"We were all completely in awe of meeting her. She was just lovely," added Clancy.

Tim Firth, who co-wrote the "Calendar Girls" film, also penned the play that's running in Toronto through May 28.

"When we'd watched it, we laughed, we cried, we'd come out elated out of the theatre," Rosalyn Fawcett (Miss November) said of the first time they saw the stage show, which first debuted in London.

"We never expected any of the reaction that we got and so we were proud of what we'd done," said Baker.