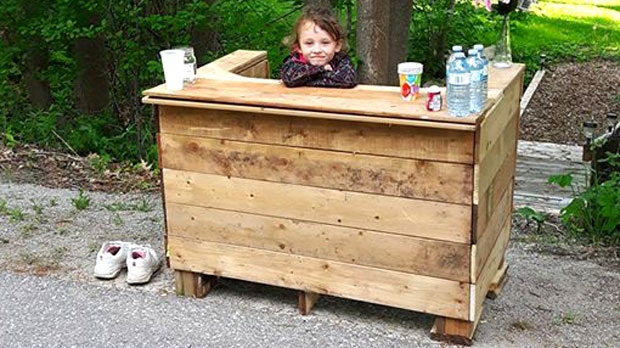 A five-year-old girl’s lemonade stand in Tay Township north of Barrie has pleased neighbours but left a sour taste with bylaw officers.

Shortly after, Smith gathered materials to help make his daughter’s dream come true. He built the stand using leftover wood from a neighbour’s fence and set it up just beside their house on the side of the Tay Shore Trail on Wednesday.

Smith said they chose the location for the stand so Lily would not be near the road where she’d be at risk from passing traffic while she was operating the stand.

For the past week neighbours have been visiting Lily’s stand for free lemonade and water for dogs walking along the trail with their owners.

“Everybody’s got huge smiles on their faces and they don’t see a lot of it (lemonade stands) anymore,” he said.

While nearby residents and trail walkers are enjoying Lily’s stand, it isn’t going over well with everyone.

On Friday, Smith discovered a notice placed on the family’s front door and another one on the lemonade stand.

The letter notified him that he had 10 days to take down the wooden stand or it would be removed by the township at a cost of $125 that would come out of his pocket.

Smith posted a photo of Lily at her stand and the notices to Facebook on Sunday.

“Wow Tay Township you truly are ruthless,” the post said. “It’s a five-year-old’s lemonade stand! On a walking trail, not the road. Unreal.”

“Our reaction was a little taken aback by it,” Smith said. “It’s not like an actual food stand or anything that we’re profiting from. There are a lot of people that are extremely upset with the way they dealt with it.”

Meanwhile, the chief administrative officer for the township, Robert Lamb, told CTVNews.ca that the letters requesting the stand’s removal were issued due to liability concerns as the area is already facing two separate lawsuits from visitors who were injured on the Tay Shore Trail while rollerblading.

“If somebody was biking along and they caught their handlebars on it, the fact that it was there on the trail opens the municipality up to liability,” Lamb said.

“We’re being made out to be monsters for taking somebody’s lemonade stand off the trail, but the reality is, it is public land and if somebody had hit it, we then could get sued and those are public dollars that then have to defend the municipality.”

Lamb said the family should have reached out to the township before pursing their plans to build the stand so they could possibly come up with an alternative solution.

Smith, however, disagrees as he says there are other objects such as garbage cans and benches in the area that could also be considered dangerous to trail users.

“We just kind of feel like, if you’re riding down the trail and you run into a popsicle stand or an ice cream stand or a lemonade stand with your bike, then you’re more of a hazard than the fixture on side of the trail,” he said.

Smith said he has yet to tell Lily that the lemonade stand needs to be taken down as he is waiting to speak to officials about the matter.

“My daughter enjoys it and the people on the trail enjoy it and it seems only to be the township that’s not enjoying it,” he said.

For now, Smith said he will help Lily continue to set up shop.