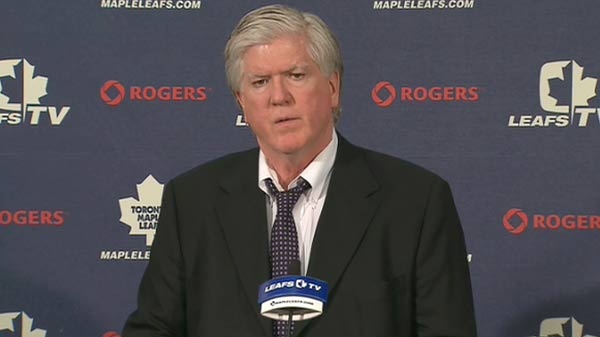 TORONTO - Brian Burke has something in common with fans of the Toronto Maple Leafs -- he's growing impatient waiting for the team to end its long playoff drought.

During Wednesday's end-of-season address, the Leafs general manager reiterated that he's not keen on waiting long for the 29th-place team to become a contender. In fact, he expects it to happen next year.

"I'm not interested ... in a five-year rebuild like some of these teams have done," said Burke. "Maybe because of my age, maybe just because I know it doesn't have to be five years because it wasn't in Anaheim.

"I like the group that finished the year, I think just on internal improvement we will be better. I think we will be good enough with this group and a couple additions to say in training camp that the playoffs are a reasonable goal."

Of course, that's the same expectation Burke had at the outset of this season and his team was never a factor in the Eastern Conference, missing the playoffs for the fifth straight time.

The first alarm bells came for the GM while watching the Leafs final pre-season game, when Buffalo scored seven times on 24 shots against goaltender Vesa Toskala. Starting the season with Toskala in the No. 1 role proved to be a big mistake.

"Buffalo smoked him like a Cuban cigar," said Burke. "I'm upstairs going 'Holy moley, maybe we're wrong here.' You can't win without goaltending, it corrodes your whole style of play. It has a corrosive, acidic effect on anything you do."

After a brutal first half, Burke traded away eight players -- including Toskala -- and a younger lineup started winning more. Toronto was 13-11-2 after acquiring defenceman Dion Phaneuf and goaltender J.S. Giguere in separate deals on Jan. 31.

The GM singled out six players for their positive contributions to the team during the season: Jonas Gustavsson, Phil Kessel, Nikolai Kulemin, Colton Orr, Carl Gunnarson and Phaneuf, who is likely to be named captain over the summer.

Burke indicated the decision on the captaincy lies solely with coach Ron Wilson, who has all but handed Phaneuf the C. However, he's in favour of putting Phaneuf into a leadership role.

"I've never brought a guy in who had a bigger impact on a team from a personality standpoint," said Burke. "It was like an adrenaline bomb went off in our dressing room. This guy brought energy and a positive approach, he challenges everybody.

"He challenges me, he barks at me sometimes, 'We need this or that.' I haven't had that before."

The top item on his off-season shopping list will be forwards. With a relatively weak crop of free agents set to hit the market, he plans to aggressively pursue trades.

Toronto's roster has been dramatically overhauled since Burke was hired in November 2008 and the process could continue this summer if defenceman Tomas Kaberle is dealt. The longest-serving Leaf sees his no-trade clause disappear in June and Burke says his management team has already set an internal price for Kaberle.

Some of the most important strides for the team will have to be made from within. Burke expects all of his players to put in an extra effort with their off-season workout programs and calls strength and conditioning coach Anthony Belza the most important man in the organization.

The Leafs are also hoping 2009 first-round pick Nazem Kadri will be ready to step in the lineup, although Burke is quick to note that the gifted centre isn't a lock to make the jump to the NHL in the fall.

"What happens between now and when he gets off the bus at training camp is going to determine whether he makes our team or not," said Burke.

Barring a trade, there won't be any blue-chip prospects joining the organization at this year's draft. The Boston Bruins own Toronto's first- and second-round selections from the trade that landed Kessel.

Burke certainly wasn't watching the NHL's draft lottery on Monday night, when his team's pick officially became the No. 2 selection for Boston. He doesn't think that it was too high a price to pay for the young winger, who scored 30 goals in 70 games this season.

"All this debate about the Kessel deal -- was it worth it? Was it not worth it? -- I find it amusing," said Burke. "I got news for you, we're all going to know at some point. This is no different than two farmers side by side arguing whether they plant soy beans or corn. And they argue and one guy plants corn and one guy plants soy beans.

"Guess what, we're going to know at some point who won -- we don't have to argue the whole time while the plants grow for god sake."

The veteran GM has never endured a tougher season personally. He's still struggling to cope with the recent death of his 21-year-old son Brendan, although he said Wednesday that he's done discussing the tragedy with the media.

"We'll deal with it as a family," said Burke.

The fiery GM was in good spirits while addressing the media for nearly 40 minutes and remains confident he can build a winner in Toronto. Burke says he'd put his record up against anybody and has no concerns about his job security.

"I'm immune to fear of being canned," said Burke. "I've been canned, this doesn't scare me anymore. I'll either get it done here or I won't.

"I'll join that long list of souls who haunt the building or I'll be back talking to you folks for a few more years."